How to Kill Your Best Friend by Lexie Elliott #bookreview #thriller 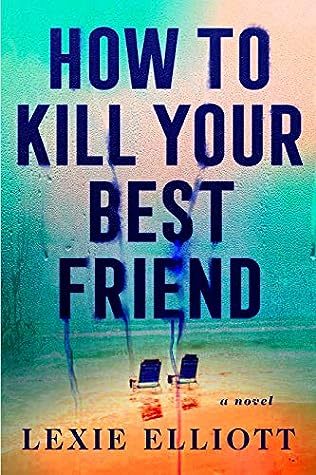 Title: How to Kill Your Best Friend

If you suspected your best friend, the person you were closest to in the whole world, was a murderer, what would you do? Would you confront her? Would you help keep her secret? Or would you begin to feel afraid? Most importantly, why don’t you feel safe now that she’s dead? From the author of The French Girl comes a novel full of secrets, suspense, and deadly twists.

Georgie, Lissa, and Bronwyn have been inseparable since dominating their college swim team; swimming has always been an escape from their own problems, but now their shared passion has turned deadly. How can it be true that Lissa, the strongest swimmer they know, drowned? Granted, there is something strange about Kanu Cove, where Lissa was last seen, swimming off the coast of the fabulous island resort she owned with her husband.

Lissa’s closest friends gather at the resort to honor her life, but Georgie and Bron can’t seem to stop looking over their shoulders. Danger lurks beneath the surface of the crystal-clear water, and even their luxurious private villas can’t help them feel safe. As the weather turns ominous, trapping the funeral guests together on the island, nobody knows who they can trust. Lissa’s death was only the beginning….

How to Kill Your Best Friend by Lexie Elliott is a slow burning thriller. This thriller read is told from a dual perspective of two of the three best friends involved, Georgie and Bronwyn, alternating their points of view between each of the chapters. There’s also a list of methods for this madness of killing one’s best friend interspersed between some of the chapters such as opening with Method 1: Accident which will show murder is not always as easy as the books make it out to be!

Georgie, Lissa, and Bronwyn were once the best of friends as they bonded in university over their shared love of swimming. The trio has now been split apart with the death of Lissa and Georgie and Bronwyn don’t know how to feel losing their best friend. The ladies have gathered at Kanu Lake to mourn their friend but Georgie cannot fathom how Lissa could have possibly drowned, the best swimmer among them. Things just do not feel right on the island despite the gorgeous surroundings or beautiful villas.

So I’m not always a huge fan of a slow burn thriller like I found in How to Kill Your Best Friend but this one was not so bad. Perhaps it was the fact the mystery was taking place in a luxurious vacation type of setting which I always adore or the creative format with the murder lists interspersed between the chapters but whatever it may be I did enjoy waiting for the action to unfold. It could definitely have used a bit less focus on the swimming in the middle though. The other thing that I found with this one was I was quite sure I knew what would happen and was just waiting to find out the specifics at the end. So combine the slower pace and what seemed easy to solve for me as an avid read I ended up giving this one three and a half stars overall.

Lexie Elliott has been writing for as long as she can remember, but she began to focus on it more seriously after she lost her banking job in 2009 due to the Global Financial Crisis. After some success in short story competitions, she began planning a novel. With two kids and a (new) job, it took some time for that novel to move from her head to the page, but the result was The French Girl, which will be published by Berkley in February 2018 – available to pre-order on Amazon now!