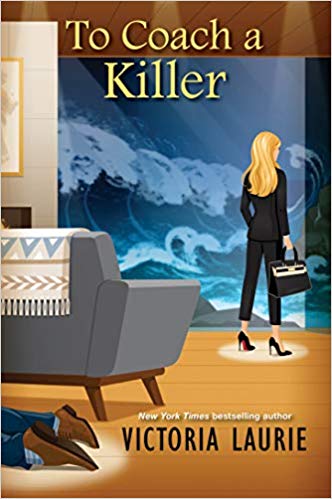 Title: To Coach a Killer

Soaking up a luxurious new chapter alongside her saucy bestie, Cat Cooper plans on emerging as the premier life coach in East Hampton by summertime. All she has to do is survive an offseason replete with desolate beaches, slow business, and murder . . .

As the Hamptons drags through early spring, Cat’s shot at becoming the toast of the town in time for Memorial Day is dwindling–and fast. The only client she can find has been housebound for decades and claims to be the victim of a devastating curse. Then there’s the matter of Detective Shepherd’s intense jealousy over Maks Grinkov, the handsome bad boy who approaches Cat with an unusual offer she can’t stop thinking about. Havoc finally breaks loose when a string of murders rocks the coastal community, landing Maks on the hook as the culprit . . .

While the body count rises, Cat goes from life coaching to sleuthing for the truth about Maks’s less-than-wholesome background. But after digging deeper, she questions if Detective Shepherd had an unwitting hand in a related homicide case after tangling with the wrong people. With a storm approaching shore and no one to trust, Cat and her sharp-tongued best friend, Gilley, must solve a client’s curse and a series of violent deaths before a killer sends them all sailing to their doom . . .

To Coach a Killer by Victoria Laurie is the second book in the cozy The Life Coach Mysteries series. While this is the beginning of a new series the characters involved seem to have ties to the author’s two previous cozy series. Cat Cooper is the sister of the lead in the Psychic Eye Mysteries and Cat’s best friend was in the Ghost Hunter Mysteries. Not having read either series myself I can’t say how big a part these characters had or how much is a spin off into this new series. The books in this series though are like most cozy mysteries and can be read in any order or as a standalone with them containing their own mystery with character development carrying over from book to book for those that follow from the beginning.

Cat Cooper has just started her life over again in the Hampton’s after having gone through a divorce. She had sold her marketing firm which had given her enough to live comfortably while building a new home with a guest house for her friend and starting a new career as a life coach. With this now being the down season in town Cat hasn’t exactly been pulling in a ton of clients so when a new one arrives she’s determined to help him out despite his insistence that his troubles are due to a curse. Meanwhile, Cat’s friend, Maks Grinkov, admits to being involved in some shady business which lands him on the suspect list of a local murder leaving Cat to try to find the real killer.

When I finished reading the first book of this series I had some up and down feelings and thought I would go ahead and try the next book or two. With the characters being from other series I felt a bit like I was missing some backstory but I did really like them regardless and I still really do like Cat and Gilley. However, that being said my other thought on the first was some of the content seemed a bit too heavy for a cozy and this book seemed to dive into that side even further which I really wasn’t a fan of but the life coaching client side is hilarious and fun so I’m disappointed that wasn’t more the focus. I’ve already got book three to read but after this one only rated two and a half stars I’m not sure it will pick back up for me or not.