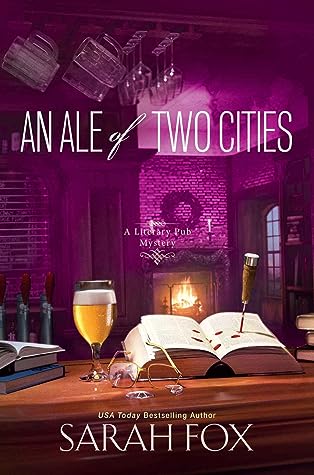 Title: An Ale of Two Cities

In this intoxicating mystery by USA Today bestselling author Sarah Fox, a winter carnival becomes a recipe for disaster when a Shady Creek celebrity gets iced.

But holiday cheer can’t compete with former resident and renowned chef Freddy Mancini, who arrives with his nose in the air, showing off his ice-sculpting skills like a modern-day Michelangelo. During the artists’ break in the night-long contest, Mel’s tools disappear . . . and Freddy is found dead with her missing pick in his chest.

Although the police turn their attention to Mel, it seems everyone in town had a grudge against Freddy, including his assistant, his mentor, his former flame, and even his half-brother.

Faster than she can fling a Huckleberry Gin, Sadie finds herself racing to make sure the police don’t arrest the wrong suspect—all while sharing a flirtation with local brewery owner Grayson Blake. Their chemistry leads to a heated rivalry at the hockey rink—and to the hot pursuit of a killer.

An Ale of Two Cities by Sarah Fox is the second book in the cozy Literary Pub Mystery series. As with most cozy series each book of the series contains it’s own mystery that will be solved so they can be read as a standalone if choosing to do so. Of course there will be character development that carries over from book to book for those that follow the series from the beginning.

The setting for this series is just as it may sound, a Literary Pub owned by booklover Sadie Coleman who has opened the Inkwell in an attempt to restart her life in a new town. Sadie had lost her job due to a business merger and she had become fed up with dealing with her ex’s gambling addiction so she chose to move to Shady Creek, Vermont for a fresh start. Sadie’s bookish side put a spin on the Inkwell in which she serves up themed cocktails and hosts many book club events in her literary themed rooms.

It’s now time for the winter carnival in Shady Creek, Vermont with the small town all decorated and lit up as Christmas is coming soon. Sadie’s friend and employee, Mel, is competing in this year’s ice carving competition and Sadie plans to root her on. However, Sadie’s ice carving tools go missing during the competition and her biggest competitor, Freddy Mancini, is found dead with the missing ice pick used as the weapon so Sadie vows to find the real killer before her friend is pinned with the murder.

Reading the first book in the Literary Pub Mystery series I was a little disappointed the series didn’t really stand out much to me and felt I needed to get to know the characters and town better. Now that I’ve read book two I felt a stronger connection to the story and really started to like the characters and setting a bit more but feel there could still be room for improvement on making them more unique in a world of so many cozies. Since the mysteries in these are solid and I did enjoy this one a bit more for three and a half stars I will happily return to see if the next book also improves for me too. 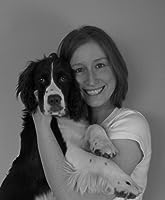 Sarah Fox was born and raised in Vancouver, British Columbia, where she developed a love for mysteries at a young age. When not writing novels or working as a legal writer, she is often reading her way through a stack of books or spending time outdoors with her English Springer Spaniel. http://www.authorsarahfox.com

← Cover Reveal: Max and the Isle of Sanctus by John Peragine
All That Glitters by Danielle Steel #bookreview #romance #chicklit →