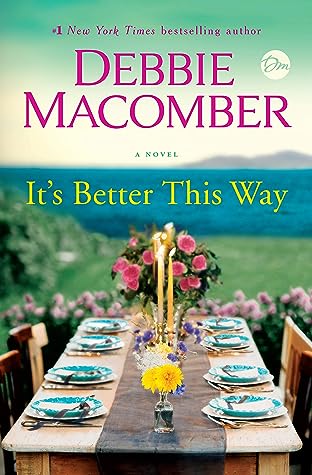 After her marriage ends, one woman’s struggle to pick up the pieces finally leads to a new beginning but is the past truly behind her? #1 New York Times bestselling author Debbie Macomber explores the powerful intersections of love and family in this poignant novel.

It’s been nearly six years since Julia Jones had her heart broken. After her husband became involved with another woman, she did everything she could to save their marriage, to no avail. Their two daughters continue to stand by Julia in the wake of their father’s behavior—and they’ve had a tough time getting along with the “other woman” who became their stepmother. Distraught after selling the family home, Julia moves into a condominium complex that offers the warmth and charm of a fresh start. Now, having settled into her new community and sold her successful interior design business, she’s embraced a fulfilling new life, one that doesn’t seem to need a man in it. Her beloved father’s trusty saying is ringing truer than ever: It’s better this way.

But when Julia meets a handsome new resident in the building’s exercise room, she can’t help but be drawn to him. Heath Johnson is a welcome change from the men she’s encountered on the occasional—mostly disastrous—dates her sister has eagerly planned for her over the years. As she and Heath, a divorcé himself, begin to grow close, their friendship blossoms into an unexpected love. However, they soon realize that combining families proves to be a challenge, even though their four children are adults.

When a dramatic revelation threatens the happiness they’ve found, Julia and Heath must reconcile their love for their children with their love for each other. If they can’t, their bright future together may be nothing but a dream.

Debbie Macomber is one of those authors that I discovered a little later in her career but after reading several of her books I want to go back and read everything of hers. Well, as most of your readers know there’s way too many books and not enough time to get to all of them so I haven’t been able to pick up all of her many titles but I do get excited every time I get a new one so of course I had to read It’s Better This Way.

It’s Better This Way is a standalone contemporary romance that features a more mature protagonist. Julia Jones had been married once, that is until her husband cheated on her and left for the other woman. Julia had done everything she possibly could to save her marriage but in the end it just wasn’t meant to be. Now six years later Julia has settled into her single life much with the help of her two wonderful daughters.

After the divorce Julia had moved into a condominium and sold her business so now in her new retired life she has taken up the habit of working out in the community gym. One day as Julia enters for her workout she finds a new neighbor already there, Heath Johnson. After a few times of crossing paths Heath introduces himself and the two become fast friends with both having a lot in common including being sure they aren’t interested in more than friendship after rough divorces.

It’s Better This Way was another lovely read from Debbie Macomber as I just knew it would be. I loved that this romance followed an older, more mature character and just fell in love with the relationship as it grew. This would probably have been a five star read had it not been for a few unlikable characters in the background, I just didn’t understand their actions. As always though I loved the rest of the story and the character growth for a lot of the characters along the way and I will be in line once again for the next book from this author.

← Cover Reveal: I Ducking Love You by Kira Archer
Cracked Up to Be by Courtney Summers #bookreview #YA #contemporary →