Such a Quiet Place by Megan Miranda #bookreview #thriller 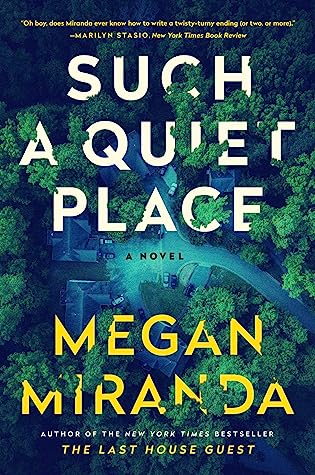 Title: Such a Quiet Place

From the New York Times bestselling author of The Last House Guest—a Reese Witherspoon Book Club selection—comes a new riveting suspense novel about a mysterious murder in an idyllic and close-knit neighborhood.

We had no warning that she’d come back.​

Hollow’s Edge used to be a quiet place. A private and idyllic neighborhood where neighbors dropped in on neighbors, celebrated graduation and holiday parties together, and looked out for one another. But then came the murder of Brandon and Fiona Truett. A year and a half later, Hollow’s Edge is simmering. The residents are trapped, unable to sell their homes, confronted daily by the empty Truett house, and suffocated by their trial testimonies that implicated one of their own. Ruby Fletcher. And now, Ruby’s back.

With her conviction overturned, Ruby waltzes right back to Hollow’s Edge, and into the home she once shared with Harper Nash. Harper, five years older, has always treated Ruby like a wayward younger sister. But now she’s terrified. What possible good could come of Ruby returning to the scene of the crime? And how can she possibly turn her away, when she knows Ruby has nowhere to go?

Within days, suspicion spreads like a virus across Hollow’s Edge. It’s increasingly clear that not everyone told the truth about the night of the Truetts’ murders. And when Harper begins receiving threatening notes, she realizes she has to uncover the truth before someone else becomes the killer’s next victim.

Pulsating with suspense and with the shocking twists that are Megan Miranda’s trademark, Such a Quiet Place is Megan Miranda’s best novel yet—a twisty locked-box thriller that will keep you turning pages late into the night.

I’ve read quite a few books by Megan Miranda and have had mixed results in the past but with a couple of those being five stars I know I would have to give Such a Quiet Place a try. While I did find myself getting lost in the story as I began reading this new thriller wasn’t without a few faults in my eyes.

The story brings readers to a close knit community known as Hollow’s Edge which seems like an ideal place to live, that is until you discover there had been a murder. A family in the neighborhood had been found inside their home and a tenant of one of the home owners, Ruby Fletcher, had been arrested for the murders.

Now, a year and a half later Ruby is a free woman when her lawyer got her conviction overturned. Harper Nash who had once shared her home with Ruby never expected to find Ruby on her doorstep after her twenty year sentence but there she was. Harper soon suspects that Ruby has an agenda for her return to the neighborhood who once turned on her.

The story in Such a Quiet Place seemed to get off to a slow start for me but the pace did seem to pick up a bit later on in the story. The setting in this one was a great one that drew me in despite the slower start. The big thing for me that brought my rating down to three and a half stars was that it felt when it was all said and done there were a lot of holes left that were never filled in. The wrap up was all fine and dandy but I was left wondering about several things and why they were a part of it all so while it was engaging to read I just couldn’t go higher on my rating.