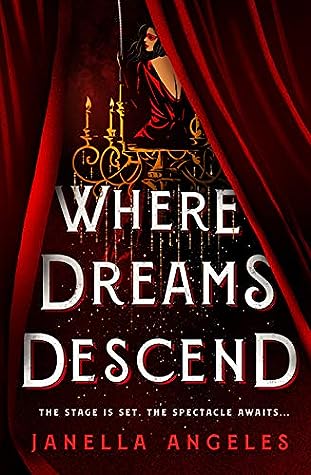 In a city covered in ice and ruin, a group of magicians face off in a daring game of magical feats to find the next headliner of the Conquering Circus, only to find themselves under the threat of an unseen danger striking behind the scenes.

As each act becomes more and more risky and the number of missing magicians piles up, three are forced to reckon with their secrets before the darkness comes for them next.

The Star: Kallia, a powerful showgirl out to prove she’s the best no matter the cost

The Master: Jack, the enigmatic keeper of the club, and more than one lie told

The Magician: Demarco, the brooding judge with a dark past he can no longer hide

Where Dreams Descend is the startling and romantic first book in Janella Angeles’ debut Kingdom of Cards fantasy duology where magic is both celebrated and feared, and no heart is left unscathed.

Kallia is a showgirl at the top of her magical game but has been trapped by Jack, the master of the club. Only wishing for escape to compete against others Kallia takes her opportunity when it comes and heads to the city where she enters the magical competition where she meets the brooding Demarco.

Where Dreams Descend is yet again another young adult fantasy that made me question why I continue to pick up this genre. Anyone who has read my reviews before have probably come across my one biggest complaint in fantasy in them moving just way too slowly with not enough progress to pull me in. This time it didn’t help that I also didn’t particularly care for the protagonist, Kallia. As much as I love a strong female lead I felt instead of strong she came off arrogant which was annoying to me. When it was all said and done this one only came in at two and a half stars for me but of course I’m more in the minority with my rating.

Janella Angeles is a Filipino-American author who got her start in writing through consuming glorious amounts of fanfiction at a young age–which eventually led to penning a few of her own, and later on, creating original stories from her imagination. A lifelong lover of books, she’s lucky enough to be working in the business of publishing them on top of writing them. She currently resides in Massachusetts, where she’s most likely to be found listening to musicals on repeat and daydreaming too much for her own good. WHERE DREAMS DESCEND is her debut novel. You can visit her online at http://www.janellaangeles.com or follow her on Twitter and Instagram @janella_angeles.