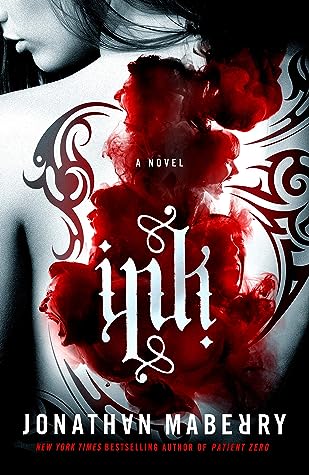 From New York Times bestselling author Jonathan Maberry comes a standalone supernatural thriller Ink, about a memory thief who feeds on the most precious of dreams.

Tattoo-artist Patty Cakes has her dead daughter’s face tattooed on the back of her hand. Day by day it begins to fade, taking with it all of Patty’s memories of her daughter. All she’s left with is the certain knowledge she has forgotten her lost child. The awareness of that loss is tearing her apart.

Monk Addison is a private investigator whose skin is covered with the tattooed faces of murder victims. He is a predator who hunts for killers, and the ghosts of all of those dead people haunt his life. Some of those faces have begun to fade, too, destroying the very souls of the dead.

All through the town of Pine Deep people are having their most precious memories stolen. The monster seems to target the lonely, the disenfranchised, the people who need memories to anchor them to this world.

Something is out there. Something cruel and evil is feeding on the memories, erasing them from the hearts and minds of people like Patty and Monk and others.

Ink is the story of a few lonely, damaged people hunting for a memory thief. When all you have are memories, there is no greater horror than forgetting.

Ink by Jonathan Maberry is a standalone horror filled supernatural thriller. In today’s society we all know we need to lock away our valuables or they may just be stolen but what if your most precious memories could be taken too?

Monk Addison is a private investigator who has moved to Pine Deep, Pennsylvania to be closer to tattoo artist Patty Cakes. Both have tattoos on their bodies that remind them of people and times in their lives but those tattoos have begun to fade. Somewhere in Pine Deep is a monster that is feeding on those precious memories that it’s victims hold close.

As a fan of horror I keep finding myself picking up stories hoping for something to give me the chills and finding myself more bored than anything. Ink felt like the type of book I think of as trying too hard with weird sexual content that was more a turn off than the chills I’d want. There were also just too many points of view to follow to get me connected which to me makes the story drag. Overall I came away wishing I had just passed on this one as it seemed to check all the wrong boxes for me.

JONATHAN MABERRY is a NY Times bestselling suspense novelist, five-time Bram Stoker Award winner, and comic book writer. His vampire apocalypse book series, V-WARS, is being produced as a Netflix original series, starring Ian Somerhalder (LOST, VAMPIRE DIARIES) and will debut in early 2019. His other works include the Joe Ledger thrillers, Glimpse, the Rot & Ruin series, the Dead of Night series, The Wolfman, X-Files Origins: Devil’s Advocate, and many others. His YA space travel novel, Mars One, is in development for film; and his novel Glimpse and the V-Wars shared-world vampire apocalypse series are being developed for TV, as is his bestselling Joe Ledger thriller series. He is the editor of many anthologies including the X-Files, Aliens: Bug Hunt, Nights of the Living Dead (co-edited with zombie genre creator George A. Romero). His comics include Captain America, the Bram Stoker Award-winning Bad Blood, Black Panther, Punisher, Marvel Zombies Return, and more. His Rot & Ruin novels were included in the Ten Best Horror Novels for Young Adults. His first novel, Ghost Road Blues was named one of the 25 Best Horror Novels of the New Millennium. A board game version of V-Wars: A Game of Blood and Betrayal was based on his noels and comics. He was a featured expert on the History Channel’s Zombies: A Living History and True Monsters. He is one third of the very popular and mildly weird Three Guys With Beards podcast. . He is a board member of the Horror Writers Association and the president of the International Association of Media Tie-in Writers. Jonathan lives in Del Mar, California with his wife, Sara Jo. http://www.jonathanmaberry.com