A Million Reasons Why by Jessica Strawser #bookreview #mystery #drama 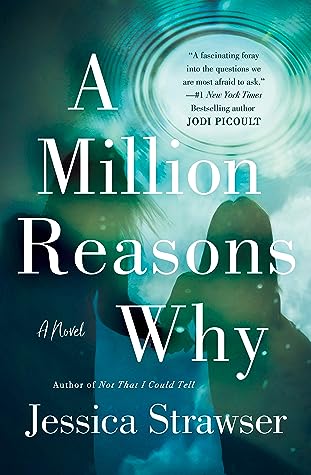 Title: A Million Reasons Why

Jessica Strawser’s A Million Reasons Why is “a fascinating foray into the questions we are most afraid to ask” (Jodi Picoult, #1 New York Times bestselling author)–the story of two women who discover a bond between them that will change both their lives forever.

When two strangers are linked by a mail-in DNA test, it’s an answered prayer—that is, for one half sister. For the other, it will dismantle everything she knows to be true.

But as they step into the unfamiliar realm of sisterhood, the roles will reverse in ways no one could have foreseen.

Caroline lives a full, happy life—thriving career, three feisty children, enviable marriage, and a close-knit extended family. She couldn’t have scripted it better. Except for one thing:

She’s about to discover her fundamental beliefs about them all are wrong.

Sela lives a life in shades of gray, suffering from irreversible kidney failure. Her marriage crumbled in the wake of her illness. Her beloved mother, always her closest friend, unexpectedly passed away. She refuses to be defined by her grief, but still, she worries what will happen to her two-year-old son if she doesn’t find a donor match in time.

She’s the only one who knows Caroline is her half sister and may also be her best hope for a future. But Sela’s world isn’t as clear-cut as it appears—and one misstep could destroy it all.

I have read several books by Jessica Strawser and enjoyed them so when I saw A Million Reasons Why I knew that I just had to pick it up. Jessica Strawser’s novels are all marketed as thrillers but with this latest I almost felt as if it were more of a family drama with just a touch of thriller.

The story introduces readers to Caroline, a wife and mother of three children. Caroline is about to have her world turned upside down when she gets the results of a simple DNA test. Somehow the results show that Caroline has a half sister that she knew nothing about, how, why??

On the other side of that DNA result sits Sela who is in the process of fighting for her life. Given a grim diagnosis Sela needs to find a match to give her any hope of survival so she submitted her DNA but now that she may have found someone Sela doesn’t know if she could possibly as for help.

While I wasn’t sure while I was reading this one if I’d really have called it a thriller myself it did have some twists along the way. The story was one that was very thought provoking too making it very compelling to continue to read to find out how it would turn out for these characters. I have known people who have found unknown relatives so I know it’s not uncommon but I couldn’t help but be curious about this particular fictional situation and feel for all of the characters as they navigated a tough situation.

JESSICA STRAWSER is the author of the book club favorites ALMOST MISSED YOU (a B&N Best New Fiction pick), NOT THAT I COULD TELL (a bestselling Book of the Month selection), FORGET YOU KNOW ME (called “masterful” in a starred Publishers Weekly review, and now in paperback), and the 2021 SheReads, E! News, & Goodreads “Most Anticipated” title A MILLION REASONS WHY, releasing to a starred Booklist review in March 2021. Her fifth novel, THE NEXT THING YOU KNOW, is forthcoming in March 2022 (all from St. Martin’s Press).

She is Editor-at-Large for Writer’s Digest magazine, where she served as editorial director for nearly a decade, and a contributing editor at Career Authors. Her diverse career in the publishing industry spans nearly 20 years and includes stints in book editing, marketing and public relations, and freelance writing and editing. A Pittsburgh native and “Outstanding Senior” graduate of Ohio University’s E.W. Scripps School of Journalism, she counts her New York Times Modern Love essay and her Writer’s Digest cover interviews with such luminaries as Alice Walker, Anne Tyler and David Sedaris among her career highlights. She lives with her husband and two children in Cincinnati, Ohio, where she was named 2019 Writer-in-Residence for the Public Library of Cincinnati and Hamilton County.

A popular speaker at writing conferences, book clubs, and book festivals nationwide, she is a proud member of the Tall Poppy Writers, Fiction Writers Co-op, and Women’s Fiction Writers Association. Connect with her on Twitter @jessicastrawser and Facebook and Instagram @jessicastrawserauthor. Visit jessicastrawser.com to learn more, read some of her work and sign up for her email list to receive occasional updates and hellos.