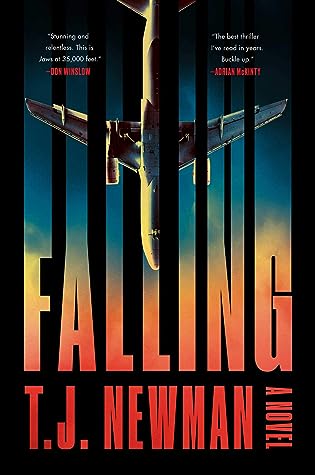 Some things you can’t forget.

You just boarded a flight to New York.

There are one hundred and forty-three other passengers onboard.

What you don’t know is that thirty minutes before the flight your pilot’s family was kidnapped.

For his family to live, everyone on your plane must die.

The only way the family will survive is if the pilot follows his orders and crashes the plane.

Well, I never would have thought that the contents of this book was what a flight attendant would think about while doing her job while flying around the skies. Falling though is the debut novel of T.J. Newman who has spent ten years working in the airline industry as a flight attendant and has written this fast paced insane ride during that time.

The book begins with Captain Bill Hoffman having a terrifying nightmare of his plane crashing only to awaken near his loving wife Carrie. Shaking off the dream Bill gets a call that he is needed to fly that day and agrees to come in despite promising his wife and son he would be home. As Bill heads out the cable repairman shows up but he takes little notice only concentrating on Carrie’s frosty attitude.

Once Bill’s flight is in the air he finds out that things took a drastic turn at his household once he was gone. Contacting Bill midflight is Sam, the repairman Bill had barely noticed who now has Bill’s wife and children held hostage. Bill is informed that he must crash the airplane or his family will die. Bill’s response “I’m not going to crash this plane and you’re not going to kill my family.”

Ok, I am a sucker for an action packed adventure and Falling by T.J. Newman was certainly that. Seeing that the author has been on planes for years in a post 911 world the scenes on the airplane felt authentic as to what would be happening in the air. My only thought though while reading that was a slight tick off my rating was Bill went to his long time friend and flight attendant for help who happened to have an FBI agent to call, what would happen if she didn’t ran through my mind. Otherwise, I could not put down this high octane thrill ride once it began trying to figure out all along the way who would survive that day and how it would all end leaving me to rate this one at four and a half stars.

T. J. Newman, a former bookseller turned flight attendant, worked for Virgin America and Alaska Airlines from 2011 to 2021. FALLING is her first novel.

← Down Comes the Night by Allison Saft #bookreview #fantasy #YA #romance #mystery #gothic
Feeding my addiction…. →