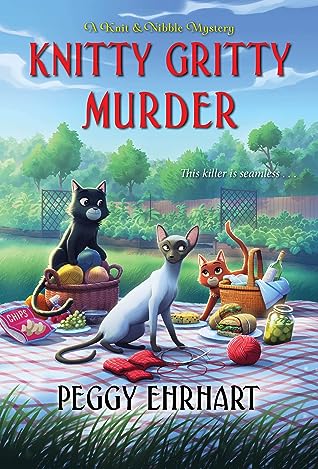 Pamela Paterson and the Knit and Nibble ladies have plenty of talents that don’t revolve around yarn. But their penchant for patterns has led to a dangerous hobby they just can’t quit—unraveling murders.

Most times of the year, the tight-knit community gardens in quaint Arborville, New Jersey, overflow with seasonal vegetables and herbs. But who planted the dead body? Farm-to-table enthusiast Jenny Miller had a cookbook in the works when she was suddenly found strangled by a circular knitting needle in her own plot. Now, the pressure is on Pamela and her neighbor Bettina as they weave together clues in search of the person who kept Jenny’s renowned heirloom plants—and budding career—from growing. With suspects and victims cropping up like weeds, it’ll take a whole lot more than green thumbs and creative minds this spring to entangle the crafty culprit . . .

Knitty Gritty Murder by Peggy Ehrhart is the seventh book in the cozy A Knit & Nibble Mystery series. Each book of the series contains it’s own mystery that will be solved so they can be read as a standalone or in any order one chooses. However, those that follow from the beginning will see the full character development that carries over from book to book.

Pamela and her best friend and fellow knitter, Bettina, first became involved in what has become a habit for them in solving murders when a body was found at Pamela’s home. This time around however as the community of Arborville, New Jersey comes together in the community gardens they find more than plants when the body of a farm to table enthusiast, Jenny Miller, is found strangled with with a knitting needle in her own garden plot.

I began following this series in the beginning as this one has an endearing quality to me reminding me of my own knitting grandmother. I came to love the characters in here and their quirky antics and continue to come back time and time again. However, each time I remind readers in my reviews that this one does have one big drawback to me that always leaves the books at three and a half stars and that is the overdoing of the details of the knitting and cooking in the stories. I keep wishing that time was spent more on elaborating on the mystery but alas I still enjoy Pamela and Bettina to much to not join them on their journey.