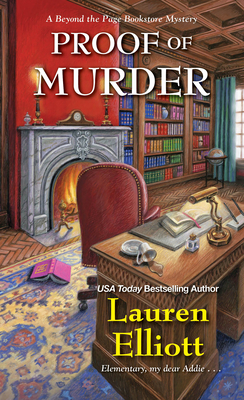 The seaside New England town of Greyborne Harbor is home to many grand estates, including the Queen Anne Victorian Addie inherited from her great aunt. Now one of those mansions is holding an estate sale, which is just what the bookshop owner needs to replenish her supply of rare editions—even if the house is rumored to be haunted. Assisting an overwhelmed insurance appraiser with the inventory, Addie discovers an 1887 magazine containing Arthur Conan Doyle’s first Sherlock Holmes novel, A Study in Scarlet, which she estimates to be worth over one hundred and fifty thousand dollars.

But when Addie later finds the appraiser dead in the estate’s private library, with the door bolted from the inside, and the priceless edition missing, it’s a mystery worthy of the Great Detective himself. She’s certain the death and the robbery are connected—but who, other than a ghost who can walk through walls, could have gotten in to do the deed? It’s up to Addie to find the key to the crime—before she’s the next one cornered by a killer . . .

Proof of Murder by Lauren Elliott is the fourth book of the cozy Beyond the Page Bookstore Mystery series. Each book of this series contains it’s own mystery to solve so they could be read as a standalone or in any order. However, one would get to know the characters better reading the series in order with some character development carrying over book to book.

In the first book of this series, Murder by the Book, readers were introduced to Addison Greyborne who had returned to her hometown, a small New England town that had been named for her ancestors back in Colonial times. Addie had been still recovering from the murder of her fiance, her father dying in a tragic accident and then had found out a long lost aunt had also died but left her whole estate to Addie.

Addie’s inheritance had given her the opportunity to start over and continue to work with books after leaving her job at the Boston Public Library. With her aunt having so many rare books in her collection and the funds to open a shop Addie decided to open Beyond the Page bookstore despite not everyone in town being overly welcoming. Now Addie finds herself in a supposedly haunted mansion trying to solve a murder in a locked room.

I have been following the Beyond the Page Bookstore series from the beginning and it isn’t quite as quirky and humorous as I normally prefer but I have still enjoyed reading. The books started off feeling like it had a touch of romantic suspense to it as Addie got close to the police chief and worked together instead of completely on her own in most cozies. As the series goes on I keep finding myself coming back and with this fourth book of the series I would again rate it at three and a half stars.

Lauren Elliott is the USA Today bestselling author of the Bookstore Mystery Series. She grew up devouring Nancy Drew, graduated to Agatha Christie, and then began writing herself as well as bringing her passion for storytelling to careers in professional theater and journalism. She can be found online at LaurenElliottAuthor.com.

← Sedition by E.M. Wright blitz with giveaway
The Summer I Found Myself by Colleen French #bookreview #womensfiction #contemporary →