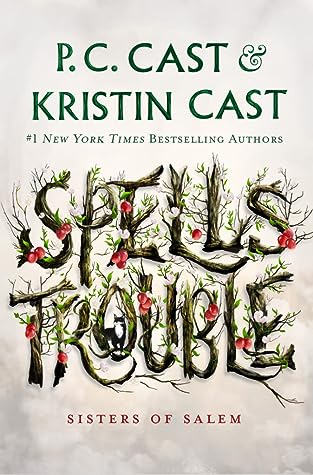 Hunter and Mercy Goode are twin witches, direct descendants of the founder of their town of Goodeville. As their ancestors have done before them, it is now time for the twins to learn what it means to be Gatekeepers–the protectors of the Gates to different underworlds, ancient portals between their world and realms where mythology rules and nightmares come to life.

When their mother becomes the first victim in a string of murders, the devastated sisters vow to avenge her death. But it will take more than magic to rein in the ancient mythological monsters who’ve infected their peaceful town.

Now Hunter and Mercy must come together and accept their destiny or risk being separated for good.

Spells Trouble by P.C. Cast, Kristin Cast is supposed to be the first book of a new  young adult paranormal fantasy series featuring a set of sixteen year old twin witches. However, I’m using the word supposed there due to the fact that one of my biggest problems with this one is it didn’t seem to know what it really wanted to be.

The series is about Hunter and Mercy Goode who are twin witches that are just celebrating their sixteenth birthday. These girls come from a long line of witches and their mother is about to have them perform the ceremony for them to become protectors of the Gates to different underworlds. These ancient portals between their world other realms house all kinds of evil and when their mother becomes the first victim of the gates breaking down the girls must protect their world.

Now, having read other books from these authors I have had my ups and downs with their series but my usual complaint was that the books would drag on and just be too lengthy for my taste. Seeing this new first book of the series was only around 300 pages I thought it should move faster so I took a chance. Well it did move at a better speed and the fantasy had huge potential but it still was a miss for me.

Spells Trouble to me would often feel like more of a middle grade book than young adult but then you have instances where it felt like it went too far for even YA…most notably a sex scene tossed in. There were also too many times I thought let’s just get back to the magic and the bones of the story which at times had huge potential but it just didn’t feel like everything meshed together very well. Being a shorter read as I said it took three days for me to drag myself to the finish and for me being someone who when totally invested could read two books of this length in a not so busy day felt like a year. So unfortunately this won’t be one series I won’t be coming back to which is a shame as it could have been a lot of fun. 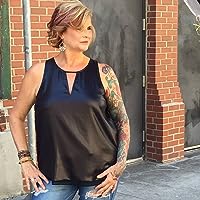 #1 NY Times and #1 USA Today author PC Cast was born in the Midwest, and grew up being shuttled back-and-forth between Illinois and Oklahoma, which is where she fell in love with Quarter Horses and mythology (at about the same time). After high school, she joined the United States Air Force and began public speaking and writing. After her tour in the USAF, she taught high school for 15 years before retiring to write full time. PC is a member of the Oklahoma Writers Hall of Fame. Her novels have been awarded the prestigious: Oklahoma Book Award, YALSA Quick Pick for Reluctant Readers, Romantic Times Reviewers’ Choice Award, the Prism, Holt Medallion, Daphne du Maurier, Booksellers’ Best, and the Laurel Wreath. PC is an experienced teacher and talented speaker. Ms. Cast lives in Oregon near her fabulous daughter, her adorable pack of dogs, her crazy Maine Coon, and a bunch of horses.

Kristin Cast is a #1 New York Times and #1 USA Today bestselling author who teams with her mother to write the wildly successful HOUSE OF NIGHT series. She has editorial credits, a thriving t-shirt line, and a passion for all things paranormal. When away from her writing desk, Kristin loves going on adventures with her friends, family, and significant other, playing with her dogs (Grace Kelly and Hobbs the Tiny Dragon), and is obsessed with her baby.