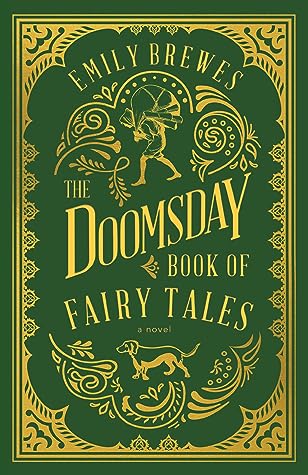 An astounding tale about a dangerous quest in an eerie post–climate collapse world.

A long time ago, the Vanderchucks fled the growing climate disaster and followed their neighbours into the Underground. Jesse Vanderchuck thought it was the end. Of the world. Of life. Eventually, Jesse’s little sister, Olivia, ran away and Jesse started picking through trash heaps in Toronto’s abandoned subway tunnels. Day in, day out.

Fighting illness and the hostile world aboveground, Jesse and Doggo embark on a fool’s errand to find Olivia ― or die trying. Along the way, Jesse spins a series of fairy tales from threads of memories, weaving together the past, present, and future into stories of brave girls, of cunning lads, of love in the face of wickedness, and of hope in the midst of despair.

The Doomsday Book of Fairy Tales by Emily Brewes is a dystopian science fiction fantasy. The main character in this one has grown up in his dystopian “after” world in which his family had joined others in hiding underground when the end of times came. However, one of the children runs away from the family and had never returned.

Jesse Vanderchuck is now grown and has determined that it is time for him to leave the home he has known growing up and go in search of his sister that disappeared from the underground years before. As Jesse goes on his journey readers are told the “fairy tales” by way of Jesse’s memory.

I have to say this was sort of a rather strange one as you go from the main story to each of the tales along the way. I found myself more caught up and wanting to know more of Jesse, his talking dog and his current world more so than enjoying the tales he told along the way and wanting a deeper story on that front. In the end I found this one to be an OK read that went by quickly.

Emily Brewes grew up in the wilds of northern Ontario, where she learned to be afraid of nature, especially bugs. She now writes wistfully of its rugged beauty and haunting landscapes. Emily lives in Toronto.