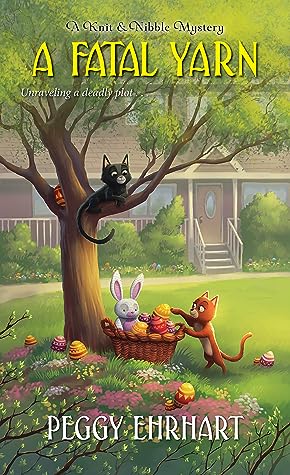 Pamela Paterson and her Knit and Nibble club must clear the name of one of their knitters when he’s accused of murdering the mayor . . .

The trees in Arborville, New Jersey, have started sporting sweaters. Part of the trend of public knitting art? Not exactly. An anonymous activist has been wrapping trunks in yarn to cover red X’s that mark certain trees for removal by the town so they don’t interfere with power lines. When the town’s mayor—who supports cutting down the trees—is murdered, Pamela wonders if the tree hugger committed homicide to prevent arborcide. A knitter is arrested, but it’s one of Knit and Nibble’s own—the harmless Roland DeCamp, who was seen arguing with the mayor. Pamela is sure the police are barking up the wrong tree. With the help of her reporter friend Bettina, she branches off on her own investigation to root out the real killer . . .

A Fatal Yarn by Peggy Ehrhart is the fifth book in the cozy A Knit & Nibble Mystery series. Each book of the series contains it’s own mystery that will be solved so they can be read as a standalone or in any order one chooses. However, those that follow from the beginning will see the full character development that carries over from book to book.

Pamela and her best friend and fellow knitter, Bettina, first became involved in what has become a habit for them in solving murders when a body was found at Pamela’s home. This time around however Pamela and Bettina find themselves investigating the murder of the mayor when the agenda he was supporting has had obvious opposition which may have resorted to murder.

I have followed the Knit & Nibble series from the beginning as this one has an endearing quality to me reminding me of my own knitting grandmother. The characters in this cozy series keep me coming back time and again as I always get a good chuckle out of their antics. However, I find myself always coming to the same conclusion of wishing the author would break away from the overly descriptive recipes and knitting and spend more time on the mystery and characters leaving my rating again at 3 1/2 stars.