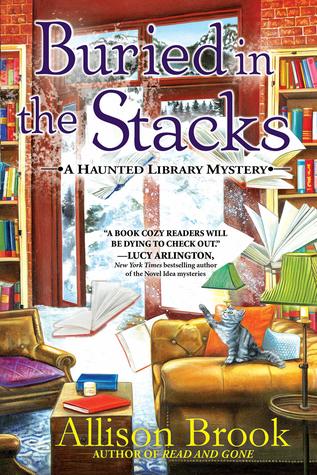 Title: Buried in the Stacks

Librarian Carrie Singleton is building a haven, but one of her neighbors is misbehavin’. Can resident spirit Evelyn help Carrie catch the culprit who made her a ghost?

In winter, the Haunted Library is a refuge for homeless townspeople. When a group purchases a vacant house to establish a daytime haven for the homeless, Carrie offers the library as a meeting place for the Haven House committee, but quickly learns that it may be used for illegal activities.

As the new Sunshine Delegate, Carrie heads to the hospital to visit her cantankerous colleague, Dorothy, who had fallen outside the local supermarket. She tells Carrie that her husband tried to kill her–and that he murdered her Aunt Evelyn, the library’s resident ghost, six years earlier.

And then Dorothy is murdered–run off the road as soon as she returns to work. Evelyn implores Carrie to find her niece’s killer, but that’s no easy task: Dorothy had made a hobby of blackmailing her neighbors and colleagues. Carrie, Evelyn, and Smoky Joe the cat are on the case, but are the library cards stacked against them?

Buried in the Stacks by Allison Brook is the third installment of the paranormal cozy The Haunted Library Mysteries series. As with most cozy mysteries each book of The Haunted Library Mysteries contain their own mystery solved within the book so they all could be read as a standalone or in any order if choosing to do so. However, for those following along from the beginning there will be character development carried over from book to book.

Carrie Singleton had returned to Clover Ridge, Connecticut to stay with her aunt and uncle for a while but when she was just about to move on she was given the opportunity to become the head of programs and events at the local library. When she was offered the job Carrie was almost ready to turn it down when she heard a strange voice telling her to think on it. Thinking it was her own mind telling her not to pass up the offer quite so quickly she did just that. Carrie found the job was more than she could have wanted so she stayed and then found out the voice that convinced her to stay was not her conscience but a friendly ghost of a former employee that helps Carrie in her new position.

Now that it’s winter in Clover Ridge the local homeless have begun to spend their time at the library during it’s opening hours to keep warm which leads to a bit of trouble sending everyone scrabbling for an alternative. Just as Carrie is organizing meetings for a new project to help the homeless one of her co-workers suffers an accident which she confesses to Carrie may have been an attempt on her life. A few days later though someone succeeds in killing Carrie’s co-worker in a hit and run leaving Carrie looking for a killer while still keeping track of the libraries events.

Following this series from the beginning I always think to myself with each book that it’s a shame that real public libraries couldn’t be as nice as the one Carrie works in since it seems to have an endless amount of funds for all kinds of things but while unrealistic it does make a lovely book setting. Also the library coming with it’s own resident ghost in Evelyn that can help spy on patrons to help solve murders makes for fun reading as she and Carrie investigate. This latest read also to me was a step up from the last book keeping me more entertained in the mystery and characters this time around feeling as if this series is now coming into it’s own. 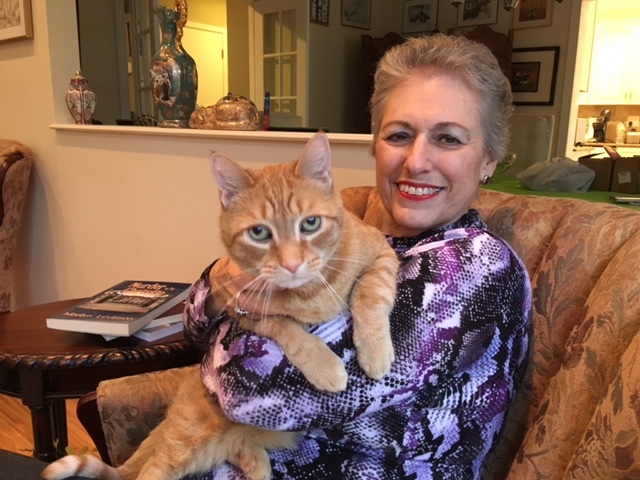 As Allison Brook she writes the Haunted Library mystery series. DEATH OVERDUE, the first in the series, was an Agatha nominee for Best Contemporary Novel in 2018. CHECKED OUT FOR MURDER, the fourth book in the series, will be released in 2020.

THE DEVIL’S PAWN, Marilyn’s horror-suspense YA that will give you chills but leave you smiling when you’ve read the last page, is on Book Town’s Summer 2016 Reading List.

Her Golden Age of Mystery Book Club mysteries have received many wonderful reviews. MURDER A LA CHRISTIE, the first in the series, was a Kings Rivers Life Magazine’s “Best of 2014” and on Book Town’s 2014 Summer Mystery Reading List. Professor Lexie Driscoll leads discussions about Christie novels as she solves the murders of various members of her book club. In the sequel, MURDER THE TEY WAY, Lexie and the book club talk about Josephine Tey’s mysteries as she investigates murders and unravels secrets.

Untreed Reads has brought out new e-editions of Marilyn’s Twin Lakes mysteries. A MURDERER AMONG US, was awarded a Suspense Magazine “Best Indie” and on Book Town’s Summer Reading List. The sequel, MURDER IN THE AIR, was on Book Town’s Fall Reading List. Both books are available as audiobooks. Uncial Press e-publishes her ghost mystery, GIVING UP THE GHOST, and her romantic suspense, DANGEROUS RELATIONS. Most of Marilyn’s mysteries take place on Long Island, where she lives.

Her books for young readers include NO BOYS ALLOWED, RUFUS AND MAGIC RUN AMOK, which was awarded a “Children’s Choice,” GETTING BACK TO NORMAL & AND DON’T BRING JEREMY.

Marilyn loves traveling, reading, knitting, doing Sudoku, and visiting with her grandchildren, Olivia and Jack, on FaceTime. She is co-founder and past president of the Long Island chapter of Sisters in Crime.

Her website is: http://www.marilynlevinson.com Stop by and visit. She loves to hear from readers.