Annie and Lee were just children when a brutal revolution changed their world, giving everyone–even the lowborn–a chance to test into the governing class of dragonriders.

Now they are both rising stars in the new regime, despite backgrounds that couldn’t be more different. Annie’s lowborn family was executed by dragonfire, while Lee’s aristocratic family was murdered by revolutionaries. Growing up in the same orphanage forged their friendship, and seven years of training have made them rivals for the top position in the dragonriding fleet.

But everything changes when survivors from the old regime surface, bent on reclaiming the city.

With war on the horizon and his relationship with Annie changing fast, Lee must choose to kill the only family he has left or to betray everything he’s come to believe in. And Annie must decide whether to protect the boy she loves . . . or step up to be the champion her city needs.

From debut author Rosaria Munda comes a gripping adventure that calls into question which matters most: the family you were born into, or the one you’ve chosen.

Fireborne by Rosaria Munda is the first book of the young adult fantasy The Aurelian Cycle series. Told from multiple points of view this fantasy is one of young dragonriders dealing with a world with plenty of political intrigue with a small bit of romance added into the mix.

Annie and Lee are both orphans that were born into a world in the middle of a brutal revolution. Annie and Lee came from very different backgrounds in their world, Annie had been a lowborn while Lee had been an aristocrat but with the revolution everyone was eligible to become a dragonrider and status was based on their abilities leaving Annie and Lee both rising stars now.

To me Fireborne was one of those so-so young adult novels that the biggest downfall to me was the incredibly slow pace of the story. By the end of this one the action certainly picked up but I would have loved for that to have happen much sooner. I also felt the story could have flowed better between the characters sometimes along with needing to dig deeper into action. 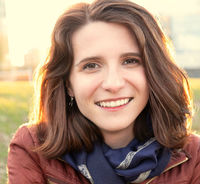 Rosaria grew up in rural North Carolina, where she climbed trees, read Harry Potter fanfiction, and taught herself Latin. She studied political theory at Princeton and lives in Chicago with her husband and cat.