Return Addresses by Michael A. McLellan book blitz with giveaway

Michael A. McLellan has a new book out in the world! Read on for an exclusive except and a fantastic giveaway — A $20 Amazon gift card, and a copy of Return Addresses!

Psst, bloggers and book reviewers! There is also going to be a blog tour June 10th to the 26th, if you’re interested! Visit R&R Book Tours for more info! 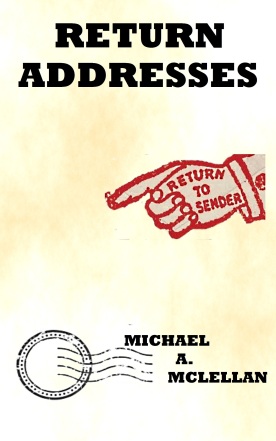 “This ain’t your world. You don’t have any friends out here. Not real ones. No one out here cares about nothin’ but where their next drink or fix is comin’ from. That, or they were born too messed up in the head to even understand what friendship is. Remember that. You can’t trust anybody. You can’t rely on no one but yourself.”

In the spring of 2015 Sean Pennington’s world of comfort and privilege is shattered and he becomes a ward of the state. Thrust into a broken foster care system, he discovers the harsh realities of orphanhood. Lonely, confused, and tormented by his peers, he runs away, intending to locate his only living relative; a grandfather he’s never met, who his only connection with is a return address on a crumpled envelope. Enter Andrea, a modern day hobo Sean meets at a California homeless encampment. Andrea travels the country by rail, stowing away on shipping container cars with other transients calling themselves traveling kids. Though battling her own demons, road-savvy Andrea

promises to help Sean on his quest, but can she protect him from the unpredictable and often violent world she lives in?

He saw the tents and the plastic tarp lean-tos too late. He was already underneath the highway overpass. The waning daylight barely penetrated the area, and the makeshift shelters were tucked back away from the road, in the shadows. If he’d seen them, he would have stopped and backtracked to the frontage road he’d passed a few hundred yards back. Breathing heavily, he slowed to a walk and kept his eyes forward.

“Hey, dude, what are you running for?” Came a voice from his left.

He turned toward the voice. Two men were walking toward him from the group of haphazardly placed shelters about twenty feet from the sidewalk. Gauging that he was less than halfway through, he turned around and started back the way he’d come. The men picked up their pace to a jog and cut him off. They stood on the sidewalk in his path. Sean stopped short of them and they casually walked forward, closing the distance. He was more afraid than he’d ever been in his life. His legs were shaking and he felt sick to his stomach. One of the men was old and had long, matted gray hair that hung to his chest in clumps. His clothes were tattered and filthy. The other was younger, maybe thirty. He was wearing a red hoodie and gray sweat pants that were so dirty they’d turned black in places. He had the hood up and masses of brown dreadlocks spilled out of the sides. The smell of the two men reminded Sean of spoiled food and urine.

“What are you running for, kid?” the older man repeated.

Sean took a step back. “I…I must have gone the wrong way.”

“The wrong way? Ha! You got that right. This is the wrongest way you could go.” The man turned and glanced in the direction Sean had came from. “You got anyone with you?” 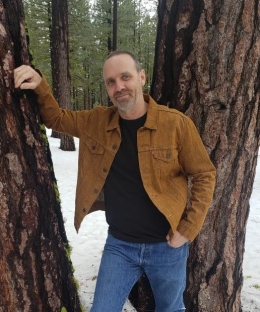 Michael’s love of books began with Beverly Cleary’s The Mouse and the Motorcycle when he was seven-years-old. Later influenced by the works of John Steinbeck, Harper Lee, Stephen King, James Baldwin, and Cormac McCarthy, Michael developed his style of storytelling. A self-proclaimed blue-collar writer, he draws on his experiences and observations to bring relevant and compelling topics to life.

Michael lives in Northern California and when he’s not writing, he can usually be found wandering around the Sierra Nevada and Cascade mountain ranges.

His body of work includes the 2014 novel After and Again, the 2015 novel American Flowers, and the 2017 novel, In the Shadow of the Hanging Tree, as well as various shorts and essays.