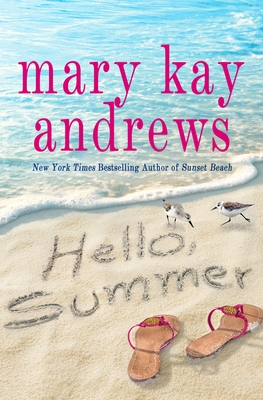 Conley Hawkins left her family’s small town newspaper, The Silver Bay Beacon, in the rearview mirror years ago. Now a star reporter for a big-city paper, Conley is exactly where she wants to be and is about to take a fancy new position in Washington, D.C. Or so she thinks.

When the new job goes up in smoke, Conley finds herself right back where she started, working for her sister, who is trying to keep The Silver Bay Beacon afloat―and she doesn’t exactly have warm feelings for Conley. Soon she is given the unenviable task of overseeing the local gossip column, “Hello, Summer.”

Then Conley witnesses an accident that ends in the death of a local congressman―a beloved war hero with a shady past. The more she digs into the story, the more dangerous it gets. As an old heartbreaker causes trouble and a new flame ignites, it soon looks like their sleepy beach town is the most scandalous hotspot of the summer.

So Mary Kay Andrews has been referred to as the queen of beach reads and really that is quite true with this latest. Hello, Summer is Mary Kay Andrews latest contemporary romance that actually has a touch of mystery with the lead being a hard hitting journalist always chasing the truth in the latest story.

Conley Hawkins left her small beach town in the rearview mirror years ago to chase a career as a journalist. Conley actually had made a success of her career winning awards and working for a large paper in Atlanta but she continued to want more setting up a new job for more money but just as she was packing up to leave Atlanta the job fell through.

With her plans going up in smoke and no where to live or work Conley jumps in her car and heads south to the town she grew up in. Conley’s sister had taken over the family business running the small paper The Silver Bay Beacon but after arriving in town Conley quickly stumbles on a major story and finds herself working for her sister.

Hello, Summer takes the normal contemporary and puts it on a high octane path with such a fast paced hard hitting lead. We still have plenty of family drama with some romance mixed in but it was so much fun following along with Conley as she uncovered decades old scandals and stayed on top of current news. With plenty of edge of your seat intensity this one really kept the pages turning as I not only fell in love with the characters and setting but had fun with the breaking news stories along the way.

A native of St. Petersburg, FL (and a diplomate of the Maas Bros. Department Store School of Charm), she started her professional journalism career in Savannah, GA, where she covered the real-life murder trials which were the basis of Midnight in the Garden of Good and Evil.

As a lifelong “junker” the author claims to know the location of every promising thrift store, flea market and junkpile in the southeastern United States, plus many parts of Ohio.

She has a B.A. in newspaper journalism from The University of Georgia (go Dawgs!), and is a frequent writing teacher and lecturer at workshops and book festivals.

Married to her high school sweetheart, she is the mother of two grown children and a proud grandmother. When not on book tour, she divides her time between Atlanta and Tybee Island, GA.