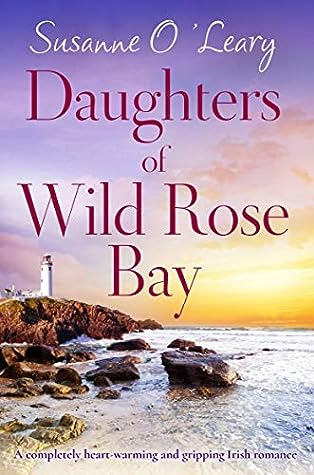 A heart-warming page-turner set on the Irish coast, where secrets hide, romance is waiting and there is every chance to make a new beginning…

Jasmine Delon feels completely lost: having just broken up with the man she thought was the love of her life, all she knows is that she can’t face living alone in her empty apartment in Paris.

When she turns up at her mother’s curiosity shop, nestled in Sandy Cove in Ireland, she hopes time with Sally will help heal her broken heart. Walks along the rugged coastline and nights under endless stars immediately make her feel at peace, and then she meets Aiden, a handsome chef in town, and sparks fly between them.

But a lot has changed since Jasmine last saw her mother. Sally is happier than ever with a charming new man in her life and Jasmine’s not sure where she fits in. Then she’s told about the ruins of an old village in a place nearby called Wild Rose Bay. The locals say it holds secrets about her mother’s side of the family…

Is delving into their history the thing that can bring Jasmine and Sally back together or will it drive them further apart? And is Jasmine brave enough to give in to the call of the Irish sea for another chance at love?

Daughters of Wild Rose Bay is a warm, feel-good novel set on Ireland’s gorgeous Atlantic coast. For fans of Sheila O’Flanagan, Debbie Macomber, Mary Alice Monroe and anyone who loves a story about second chances.

Daughters of Wild Rose Bay by Susanne O’Leary is the fourth book in the contemporary romance Sandy Cove series. As with a lot of romance series each book in the Sandy Cove series changes the main characters so each can be read and understood as a standalone if choosing to do so. However, for those following from the beginning there are glimpses of previous characters in each new book of the series.

Daughters of Wild Rose Bay introduces readers to Jasmine Delon who has packed up her things and headed to Sandy Cove after ending a relationship she thought would be her future husband. Instead of the perfect job and marriage Jasmine had dreamed of having she found out she was being used and lied to so returning to her mother’s home in Sandy Cove seemed her only option.

I have actually followed the Sandy Cove series from the beginning and completely enjoyed the previous books in the series. Now with book four for some reason I found myself feeling a bit of a disconnect from the others of the series, I suppose since it had moved away from the original family in Sandy Cove. So while this was a perfectly fine read I had to rate a little lower this time as I missed that original feel but hopefully if the series continues we will see more of all of the former characters next time.

Susanne O’Leary is the bestselling author of more than twenty novels, mainly in the romantic fiction genre, mostly romantic comedies, aka chick-lit.. Her four first novels were published in Ireland and then she started self-publishing in 2010. She has also written four crime novels and two in the historical fiction genre. She has been the wife of a diplomat (still is), a fitness teacher and a translator. She now writes full-time from either of two locations, a ramshackle house in County Tipperary, Ireland or a little cottage overlooking the Atlantic in Dingle, County Kerry. When she is not scaling the mountains of said counties or keeps fit in the local gym, she’s writing, producing a book every six months