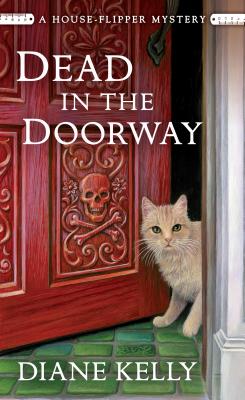 Title: Dead in the Doorway

Dead in the Doorway is the second in a delightful cozy series from Diane Kelly set in Nashville—where the real estate market is to die for.

Whitney Whitaker has scored the perfect piece of real estate: a ramshackle white Colonial at the top of a hill with views of downtown Nashville. What more could a self-taught home-improvement maven and occasional house-flipper ask for? Ideally, the property of Whitney’s dreams would not have come with a dead body blocking the entrance to the foyer. But Whitney, always quick to take heavy-duty matters into her own hands, also happens to be a skilled amateur sleuth. So that helps.

AND SKELETONS IN THE CLOSET.

Who is this older woman—and how did her corpse end up at the bottom of the staircase of this locked, unoccupied house? That is what Whitney, along with the support of her wood-working cousin Buck, Detective Collin Flynn, and, of course, feline partner-in-crime Sawdust, intends to find out. Her friendly-neighbor investigation takes a sharp turn, however, when Whitney discovers that the house’s former owner was a gourmet baker whose secret recipe for peach pie was to die for—perhaps literally. Now it’s up to Whitney to learn the truth about what happened before she loses this killer real-estate deal . . . and the killer comes knocking at her door.

Dead in the Doorway by Diane Kelly is the second book in the cozy House-Flipper Mystery series. As with most cozy mysteries each of these books in the series could be read as a standalone if choosing to do so as the mystery within is fully solved during the book. There is of course some character development carried over book to book for those fans following in order from the beginning.

In the House-Flipper Mystery series Whitney Whitaker has been working as a property manager to pay the bills for a while now while living in her parents pool house with her cat, Sawdust. Real estate and renovating are really Whitney’s passions so whenever she gets the chance she’s diving into the house flipping business.

This time around Whitney has obtained a ramshackle white Colonial with the help of a loan so she plans to move this flip quickly if she can. However, when coming over to inspect her new property Whitney has trouble opening the door only to find the body of one of the neighbors is blocking her new front door from opening so Whitney yet again finds herself with a murder mystery to solve.

This series takes a couple of my favorite things, renovating real estate and kitty cats, and combines them together so how could I say no to reading this one? Being a little different than the normal cozy this series come with chapters from the point of view of Sawdust, Whitney’s kitty. While Whitney and the secondary characters are likable enough Sawdust’s POV just gives the story that extra twist of cuteness that I enjoyed. I found this to be another fun addition to the series and will definitely look forward to more. 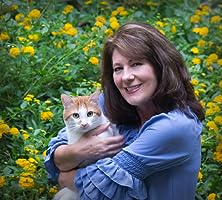 Diane’s books have been awarded the prestigious Romance Writers of America Golden Heart® Award and a Reviewers Choice Award.

Try a sample of Diane’s work, along with works by other cozy mystery authors, by checking out “Cozy Case Files” for free on Amazon Kindle.