A supernatural thriller in the vein of A Head Full of Ghosts about two young girls, a scary story that becomes far too real, and the tragic–and terrifying–consequences that follow one of them into adulthood.

In 1991, Heather Cole and her friends were members of the Dead Girls Club. Obsessed with the macabre, the girls exchanged stories about serial killers and imaginary monsters, like the Red Lady, the spirit of a vengeful witch killed centuries before. Heather knew the stories were just that, until her best friend Becca began insisting the Red Lady was real–and she could prove it.

That belief got Becca killed.

It’s been nearly thirty years, but Heather has never told anyone what really happened that night–that Becca was right and the Red Lady was real. She’s done her best to put that fateful summer, Becca, and the Red Lady, behind her. Until a familiar necklace arrives in the mail, a necklace Heather hasn’t seen since the night Becca died.

The night Heather killed her.

Now, someone else knows what she did…and they’re determined to make Heather pay.

The Dead Girls Club by Damien Angelica Walters is a part mystery/thriller and part horror bringing in some elements of the supernatural into the story. The book is one that is told by alternating between the then and now with the past parts taking place over thirty years before.

As a girl Heather Cole had been part of a group of girls who called themselves the Dead Girls Club who had an obsession with all things horror. The group led by Becca would exchange stories of the macabre, killers, witches and monsters with a special obsession with the Red Lady.

Now Heather lives with the memories of those friends and has hidden the secrets of what exactly happened to Becca thirty years before. When a necklace that once belonged to Becca shows up Heather begins to fear that someone knows what she did in the past and is going to make her pay for what she did that night.

The Dead Girls Club was one that started off with a bang but to me ended up fizzling out as it went along. The chapters of the past were more engaging to me than the current timeline as I didn’t much care for the adult Heather but as the story went along it felt as it it all just began to drag too. Overall I’d say this one was simply a so-so story since I expected a much stronger ending. 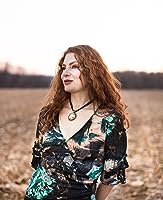 Damien Angelica Walters is the author of The Dead Girls Club, forthcoming in December 2019, Cry Your Way Home, Paper Tigers, and Sing Me Your Scars, winner of This is Horror’s Short Story Collection of the Year. Her short fiction has been nominated twice for a Bram Stoker Award, reprinted in The Year’s Best Dark Fantasy & Horror and The Year’s Best Weird Fiction, and published in various anthologies and magazines, including the Shirley Jackson Award Finalists Autumn Cthulhu and The Madness of Dr. Caligari, World Fantasy Award Finalist Cassilda’s Song, Nightmare Magazine, and Black Static. Until the magazine’s closing in 2013, she was an Associate Editor of the Hugo Award-winning Electric Velocipede. She lives in Maryland with her husband and two rescued pit bulls and is represented by Connor Goldsmith at Fuse Literary. Find her on Twitter @DamienAWalters or on her website at http://damienangelicawalters.com.