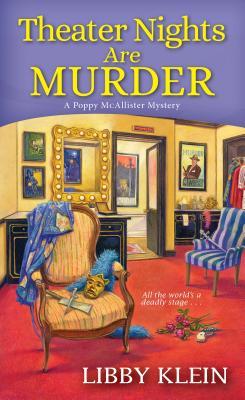 Poppy thought her toughest challenge this winter would be sticking to her Paleo diet and filling all her orders for her gluten-free goodies, but now she has to choose between two suitors. She’s not the only one with boyfriend drama. Aunt Ginny’s long-ago high-school beau, Royce Hanson, a retired Broadway actor, has returned to Cape May, New Jersey, to star in a Senior Center staging of Mamma Mia. Leaving Aunt Ginny to wonder: What’s his motivation?

Slated to open February 13th, the problem-plagued production seems to be cursed—with stolen props, sabotage, and even a death threat. But when a cast member plunges to his death from a catwalk, it soon becomes clear a murderer is waiting in the wings. Now Poppy, Aunt Ginny, and a supporting cast must take center stage to catch the killer—before it’s curtains for someone else . . .

Theater Nights Are Murder by Libby Klein is the fourth installment in the cozy A Poppy McAllister Mystery series.  Each book of this series has a new mystery to be solved by the main character so they can be read and understood as a standalone if choosing to do so. Of course as with any continuing series there is some character development that would be missed if not reading from the beginning.

In this series readers were introduced to Poppy McAllister who is a forty something widow who moved back to her hometown of Cape May after the death of her husband. Poppy returned to be near her elderly Aunt Ginny and has made a living for herself baking gluten-free goodies to sell and running the bed and breakfast they opened after  converting Aunt Ginny’s home.

Now in Theater Nights Are Murder Poppy is still juggling the interest of her two suitors when a man from Aunt Ginny’s past comes back to town. Royce Hanson was Aunt Ginny’s high school sweetheart and the one that got away when he left town to become an actor. Now with his return and taking a part in the local theater Aunt Ginny and her friend also get involved in the play but with accident after accident the play seems to be cursed.

I have followed the A Poppy McAllister Mystery series from the beginning and the first two books of the series are at the top of my absolute favorite cozies list. The characters and story are absolutely hysterical and full of that wonderful quirkiness that I love. However, I’ve lowered my rating for books 3 and 4 simply due to the love triangle going on in the story and I hope that it is resolved soon as the back and forth between suitors takes away from the enjoyment of the series in my opinion. I’ll still definitely return for the laughs and fun mysteries though as Poppy and her aunt Ginny are still favorites of mine. 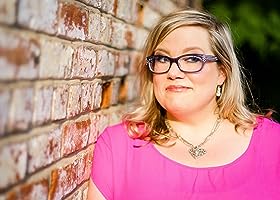 Libby Klein graduated Lower Cape May Regional High School sometime in the ’80s. Her classes revolved mostly around the culinary sciences and theater, with the occasional nap in Chemistry. She loves to drink coffee, bake gluten free goodies, and befriend random fluffy cats. She writes from her Northern Virginia office while trying to keep her cat Figaro off her keyboard. Most of her hobbies revolve around eating, and travel, and eating while traveling.