Can You See Me? by Lynne Barrett-Lee #bookreview #thriller

Title: Can You See Me?

Would you know if someone was watching you?

In the dark days since the sudden death of her surgeon husband, Julia’s main worry has always been Tash. Her student daughter was broken—she worshipped her father. But six months on, Julia thinks the light is returning. She is about to find out that she’s wrong.

When she saves the life of a boy who’s been hanging around her beach cottage, the questions start. All she has to go on is the butterfly tattoo on his wrist, but who is he? What was he doing there? And why was her late husband’s watch in his bag? Julia wants to believe it’s a casual theft, but an ominous arrival in the post confirms her suspicion that there is more to it than meets the eye.

As Tash remembers a string of strange incidents she had previously brushed off, Julia realises they are both being watched. Someone’s been toying with them, trying to frighten them, but why?

Determined to protect her daughter, Julia races to discover the boy’s identity. But what she doesn’t realise is that the truth is right in front of her. Will she see it before it’s too late?

Julia is now a single mother after the sudden passing of her husband six months before and is not only recovering from the sudden loss herself but concerned for her teenage daughter. When visiting their beach house Julia sees a young man watching in the distance but before she knows it he falls and Julia has to help administer first aid waiting for an ambulance. After the boy is rushed to the hospital Julia begins looking into who he is and why he would have been near her home when a watch that belonged to her husband is found in his things.

First, the author did a great job making this one unique in the style with the moth chapters giving a new take on the “mysterious voice” in the story. The book was one that kept me engaged throughout and was also full of twists and turns to keep a reader guessing. And while I thought I knew of a few twists it actually kept me on my toes for the biggest part of the outcome to the story which is nice for the amount I read. 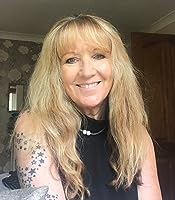 Lynne Lee was born in London and began her writing career as a teenager. She has been a full-time author since the mid-1990s, writing romantic novels, short stories and ghostwriting bestselling books. Can You See Me is her first psychological thriller and is written under a pseudonym.