A young boy is haunted by a voice in his head in this acclaimed epic of literary horror from the author of The Perks of Being a Wallflower.
Christopher is seven years old.
Christopher is the new kid in town.
Christopher has an imaginary friend.
We can swallow our fear or let our fear swallow us.
Single mother Kate Reese is on the run. Determined to improve life for her and her son, Christopher, she flees an abusive relationship in the middle of the night with her child. Together, they find themselves drawn to the tight-knit community of Mill Grove, Pennsylvania. It’s as far off the beaten track as they can get. Just one highway in, one highway out.
At first, it seems like the perfect place to finally settle down. Then Christopher vanishes. for six long days, no one can find him. Until Christopher emerges from the woods at the edge of town, unharmed but not unchanged. He returns with a voice in his head only he can hear, with a mission only he can complete: Build a treehouse in the woods by Christmas, or his mother and everyone in the town will never be the same again.
Twenty years ago, Stephen Chbosky’s The Perks of Being a Wallflower made readers everywhere feel infinite. Now, Chbosky has returned with an epic work of literary horror, years in the making, whose grand scale and rich emotion redefine the genre. Read it with the lights on.

Yes, my title on this post is absolutely correct for those that know of Stephen Chbosky’s earlier works in the young adult contemporary genre, this new title is definitely some chilling horror. There are even some similarities to the horror master himself, Stephen King in Chbosky’s new novel.

The story begins following single mother Kate Reese and her son Christopher who have made a new home in Mill Grove, Pennsylvania after fleeing an abusive relationship. Mill Grove seemed like the perfect place to make a new life until the unthinkable happened and Christopher disappeared.

Six long days pass for Kate as everyone pitches in and searches for her boy who was last seen near the woods. But despite all the searching Christopher was no where to be found until he suddenly appeared on his own saying a stranger helped him not seeming to know what happened. But as thankful as Kate was to have her son back soon Christopher begins to show signs that something is not quite the same.

Now, for me being someone who has read and watched tons and tons of horror over the years I will say this was a solid, creepy tale but not necessarily anything new. As with some early King novels you find this follows the kids a lot but also changes points of view between many characters. It also to me seemed to get a bit draggy which isn’t surprising with the length of it, the first half seemed to also go better than the second but overall I’d give this one 3 1/2 stars. 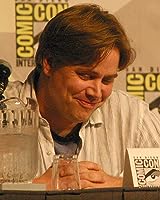 Stephen Chbosky is the author of the multi-million-copy bestselling debut novel The Perks of Being a Wallflower. In 2012, Chbosky wrote and directed an acclaimed film adaptation of his novel, starring Logan Lerman, Emma Watson and Ezra Miller. He also directed the acclaimed 2017 film Wonder starring Julia Roberts, Owen Wilson and Jacob Tremblay. Imaginary Friend is Chbosky’s long-awaited second novel.