Close to You by Kerry Wilkinson #bookreview #thriller

Title: Close to You

I pinch the screen to zoom until I’m staring at the face of a ghost. A man with very short hair, staring directly at the camera with piercing brown eyes.

He is as he was when I last saw him: wrinkles around the corners of the eyes and a knowing smirk. That’s the expression I see when I can’t sleep.

My body tenses. It can’t be him. It’s not my ex-husband. It’s not David.

I know that better than anyone because he didn’t walk out on me.

He didn’t disappear two years ago and he’s not a missing person.

I know that for a fact because I’m the one who killed him.

A brilliantly twisty thriller which will have fans of The Girl on the Train and Gone Girl absolutely gripped.

Kerry Wilkinson is another author that I’ve read plenty of books from and haven’t been disappointed yet so I was happy to read this latest standalone psychological thriller. This book is told in two different timelines switching each chapter between the “now” and the “why” which takes readers back to the past.

Close to You begins the first chapter in the now as we meet the main character, Morgan, as she is attending an awards ceremony with a friend who is happily taking pictures of the event. When Morgan sees the pictures afterward a man in the background catches her eye and she is certain it looks just like her husband, but her husband David is dead.

Several years ago Morgan had reported David missing to the police but  no trace of him had ever been found. Morgan however knows the truth about what happened that day she called in the police, Morgan had killed David herself so there is no way he could have returned, or could he?

Already going into a book knowing you have picked up a solid author is always a nice feeling, one that allows getting immersed in the story all that much sooner and I had that with this book. Oh the interest was certainly piqued knowing we had a killer on our hands and trying to figure out if the victim was back for revenge or what was happening. Definitely some twisting and turning in store that brought about a wrap up I never imagined. 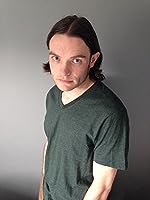 Kerry Wilkinson has had No.1 crime bestsellers in the UK, Australia, Canada, South Africa and Singapore. He has also written two top-20 thrillers in the United States. His book, Ten Birthdays, won the RNA award for Young Adult Novel of the Year in 2018.

Originally from the county of Somerset, Kerry has spent far too long living in the north of England, picking up words like ‘barm’ and ‘ginnel’.

When he’s short of ideas, he rides his bike or bakes cakes. When he’s not, he writes it all down.