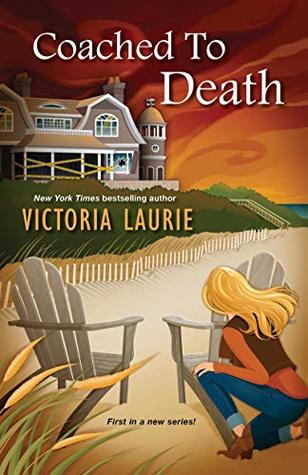 When Catherine Cooper settles in the Hamptons on the heels of a nasty split from her long-time husband, the luxurious coastal community seems like the perfect place to get back on track in style. But as Cat soon discovers, starting fresh on the East End can be deadly . . .

Cat Cooper never imagined selling off her in-demand marketing firm would mean going from the pinnacle of success to a walking hot mess. Gouged from an unexpected divorce, Cat suddenly finds herself struggling through a new career as a business-savvy life coach for the hopelessly adrift in East Hampton and contending with Heather Holland—a spiteful neighbor who will do anything to bully her out of town. But her second act may very well continue behind bars when Heather’s dead body turns up next to a shattered punchbowl . . . and Cat’s pinned as the murderer.

But given Heather’s mean girl reputation, any one of the guests at her invite-only luncheon could have committed the crime before planting Cat’s punchbowl next to the body. Determined not to trade designer duds for an unflattering prison jumpsuit, Cat sides with her best friend Gilley to scour chic boutiques and oceanfront mansions in search of the criminal who framed her. With a stoic detective looking to get her in cuffs, it’s up to Cat to catch the real killer and land on her feet once again . . .

Coached to Death by Victoria Laurie is the first book in the new cozy The Life Coach Mysteries series. While this is the beginning of a new series the characters involved seem to have ties to the author’s two previous cozy series. Cat Cooper is the sister of the lead in the Psychic Eye Mysteries and Cat’s best friend was in the Ghost Hunter Mysteries. Not having read either series myself I can’t say how big a part these characters had or how much is a spin off  into this new series.

Cat Cooper now however is just starting her life over again in the Hampton’s after having gone through a divorce. She had sold her marketing firm which has given her enough to live comfortably while building a new home with a guest house for her friend and starting a new career as a life coach.

The only downside to Cat’s new life had been a catty socialite neighbor, Heather Holland. In doing her best to fit in and get along Cat had accepted an invite to Heather’s party only to be  treated as staff. This then causes a huge fight with Heather in front or everyone after which Cat heads home only to have the police show up at her door with the news of Heather’s murder.

Coached to Death was a first book  of a new cozy  that had me up and down with my feelings the entire time. While there were things in this I enjoyed I couldn’t shrug the feeling that I was missing some backstory so I was not surprised to learn of the spin off characters. There are also little things here that felt perhaps a tad off for a cozy so when it was said and done I decided on 3 1/2 stars for this opener and would be curious enough to try book two.