Do You Dream of Terra-Two? by Temi Oh #bookreview #scifi #fantasy #YA 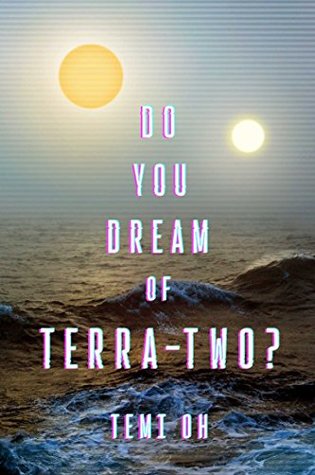 Title: Do You Dream of Terra-Two?

When an Earth-like planet is discovered, a team of six teens, along with three veteran astronauts, embark on a twenty-year trip to set up a planet for human colonization—but find that space is more deadly than they ever could have imagined.

Have you ever hoped you could leave everything behind?
Have you ever dreamt of a better world?
Can a dream sustain a lifetime?

A century ago, an astronomer discovered an Earth-like planet orbiting a nearby star. She predicted that one day humans would travel there to build a utopia. Today, ten astronauts are leaving everything behind to find it. Four are veterans of the twentieth century’s space-race.

And six are teenagers who’ve trained for this mission most of their lives.

And something always goes wrong.

Do You Dream of Terra-Two? by Temi Oh is a young adult science fiction fantasy. The story is set in the future at a time when the “space race” era has been renewed as all around the globe countries tested the boundaries of just how far and what could be discovered in space as it had come to be believed someday the Earth wouldn’t be habitable.

The British have discovered a planet far off that just may be able to sustain human life in Terra-Two. The journey however to actually travel to this new world is much much farther than man has gone before. It will actually take a team of astronauts twenty-three years to reach their destination at light speed while decades pass on Earth.

In order to actually have hope to make the journey and be able to begin colonization of Terra-Two the British  began a whole new astronaut training program. The new recruits were all pre-teens with the intention of picking the top six of the program and teaming them with three adults. Soon the six are chosen and it seems the launch will happen as planned and they journey will begin.

Picking up Do You Dream of Terra-Two? by Temi Oh I couldn’t help but  be fascinated by the concept behind the space program and where the world was at with space travel. One of the things about exploring beyond our own moon is simply the time it takes to make those distances so teenage astronauts makes sense and I was curious as to how it would play out. Now of course things don’t go as planned giving plenty of drama before and after takeoff but somehow  the more that came the more I felt it slowed the story and my interest down. Not a bad story at all but one that I felt ended a bit so-so to me.

Temi Oh graduated from King’s College London in 2015 with a BSci in Neuroscience. While at KCL, Temi founded and ran a book-club called “Neuroscience-fiction”, where she led discussions about science-fiction books which focus on the brain. In 2016, she received an MA in Creative Writing from the University of Edinburgh.