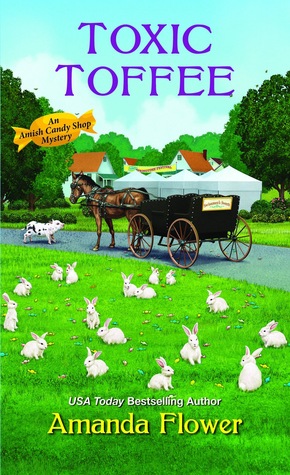 Bailey King’s in New York wrapping up a six-week shoot on her first cable TV show, Bailey’s Amish Sweets, when she gets a call from her Ohio town’s resident busybody. With Easter around the corner, Bailey’s been recruited to create a giant toffee bunny for the weeklong springtime festival that will also feature live white rabbits. But back home in Harvest, death becomes the main attraction when Stephen Raber keels over from an apparent heart attack—with Bailey and Raber’s pet bunny as witnesses.
.
Except it wasn’t Raber’s heart that suddenly gave out—a lethal dose of lily of the valley was mixed into a tasty piece of toffee. Who’d want to poison a jovial rabbit farmer who reminded Bailey of an Amish Santa Claus? To solve the murder, she and her sheriff deputy boyfriend Aiden must uncover a twenty-year-old secret. She’ll need to pull a rabbit out of a hat to keep a healthy distance from toxic people, including one venomous killer . . .

Toxic Toffee by Amanda Flower is the fourth full length novel in the cozy Amish Candy Shop Mystery series. Each of the four novels along with a companion novella feature the same characters and contain their own mystery solved within each. Ideally reading in order would be the best way to enjoy the overall series but it’s not needed as they can all be understood on their own or in any order.

This time around in Toxic Toffee Bailey has just returned from a working trip to New York where she had begun filming a cooking show. As soon as Bailey was back she got roped in with helping out with the towns’ Easter celebration but as  they are working out the details Stephen Raber collapses in the  town square. Of course instead of Stephen’s death being natural causes it becomes clear he was murdered and Bailey again helps on the investigation.

Following this series from the beginning I’ve really enjoyed it overall as it has just that right mix of quirky fun and mystery. I loved how the author has taken a regular American and thrust her into the Amish world giving her the means to fit into both the regular community and Amish people. And as much as I like the characters there’s also plenty of cute critters stealing the show too. Two thumbs up and 4 1/2 stars for this latest adventure.