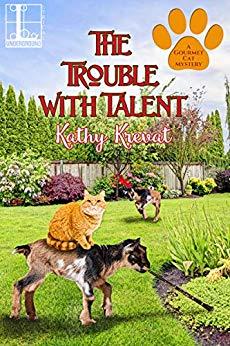 Title: The Trouble with Talent

Single mom Colbie Summers has a lot to be grateful for in the run up to Thanksgiving. Relocating back to her California hometown has brought her irascible dad and adolescent son closer.  Her gourmet cat food line—vetted by her trusty taste-tester, Trouble—is about to get a big re-order. And she’s made wonderful new friends and colleagues. Too bad one them has just been accused of murder . . .

Sunnyside’s most gifted students have been at the mercy of a shadowy network of college fixers—including an abusive oboe teacher whose recommendation is necessary to get into Julliard and a school secretary who alters grades for cash. When they turn up dead, Colbie has to untangle a cat’s cradle of suspects and motivations—from livid parents and students whose dreams have been crushed to an entire secret Facebook group of spurned lovers.

Suddenly, holiday preparations just got a lot hairier. With the big re-order now on hold and the real killer still at large, Colbie discovers that someone has been grading on a very dangerous curve—and it will take all her newfound sleuthing talent to land safely on her feet.

The Trouble with Talent by Kathy Krevat is the third book in the cozy Gourmet Cat Mystery  series. Each book of this cozy series contains it’s own mystery to be solved so they can be read and understood as a standalone. However, those that read from the  beginning will get all of the character development that happens from book to book.

In the first book of the series single mom Colbie Summers had packed up her twelve year old son and their cat, Trouble, and moved back to Sunnyside, CA. Colbie’s father had taken ill so she needed to be closer to him and decided she could move her gourmet cat food business to Sunnyside and continue to work from there.

Now Colbie’s business is continuing to grow and expand after taking on an investor and business partner, Quincy Powell. When Colbie is doing a favor for a friend she crosses paths with a cranky music teacher and doesn’t like how he’s treating his students. Colbie warns Quincy since he also has a child in the teacher’s classes and it causes a confrontation so when the teacher is found murdered Quincy is at the  top of the suspect list.

I have read this series from the  beginning and will admit going into book two I had really forgotten about the characters so while enjoyable overall I was a bit put off they hadn’t stood out more. This time however everything clicked right away and I was happy to return to the series as the characters seem to grow on me with each read. There’s a touch of quirky and plenty of suspects to the mystery so I’ll definitely be back for book four.