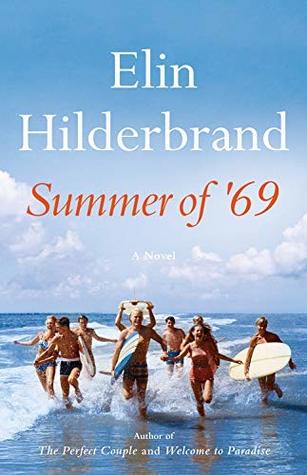 Welcome to the most tumultuous summer of the twentieth century. It’s 1969, and for the Levin family, the times they are a-changing. Every year the children have looked forward to spending the summer at their grandmother’s historic home in downtown Nantucket. But like so much else in America, nothing is the same: Blair, the oldest sister, is marooned in Boston, pregnant with twins and unable to travel. Middle sister Kirby, caught up in the thrilling vortex of civil rights protests and determined to be independent, takes a summer job on Martha’s Vineyard. Only-son Tiger is an infantry soldier, recently deployed to Vietnam. Thirteen-year-old Jessie suddenly feels like an only child, marooned in the house with her out-of-touch grandmother and her worried mother, each of them hiding a troubling secret. As the summer heats up, Ted Kennedy sinks a car in Chappaquiddick, man flies to the moon, and Jessie and her family experience their own dramatic upheavals along with the rest of the country.

In her first historical novel, rich with the details of an era that shaped both a nation and an island thirty miles out to sea, Elin Hilderbrand once again earns her title as queen of the summer novel.

Summer of ’69 by Elin Hilderbrand is a historical fiction novel that follows the Levin family during the summer of 1969. Of course with the book focusing on the  various family members in this family the point of view does change between them.

For years the Levin family has spent summers in Nantucket visiting their grandmother’s historic home. This year however the  family is being pulled apart in their own directions. Tiger, the only son, has been drafted into the military and will be sent to the war in Vietnam and this has affected each of the rest in various ways.

Blair, the oldest Levin has gotten married to a man who works with NASA and is spending her summer home alone as he works on putting a man on the moon. Kirby is the middle daughter who is a young free spirit known to protest the latest cause. Instead of heading to Nantucket Kirby has found a summer job in Martha’s Vineyard. And Jessie, the youngest and a half sibling to the  older children, is turning thirteen and not looking forward to a summer alone with her mother and grandmother.

Looking back at the history books 1969 was really a very busy year and somewhat a turning point on a lot of issues. Elin Hilderbrand did a wonderful job centering this fictional family right in the middle of so many events that it brought the era to life wonderfully. It was also nice to see the differences in personalities and how they handled what was going on at any given time. Definitely a great read I am rating at 4 1/2 stars.

Elin Hilderbrand is the New York Times bestselling author of numerous novels, including the Nantucket series, the Winter series, and over a dozen stand-alone novels, as well as two novellas. Her book Barefoot won the 2008 Romantic Novel of the Year Award.