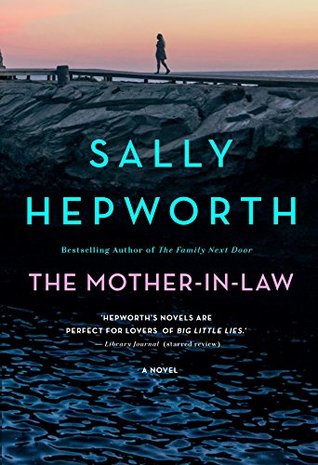 A twisty, compelling new novel about one woman’s complicated relationship with her mother-in-law that ends in death…

From the moment Lucy met her husband’s mother, she knew she wasn’t the wife Diana had envisioned for her perfect son. Exquisitely polite, friendly, and always generous, Diana nonetheless kept Lucy at arm’s length despite her desperate attempts to win her over. And as a pillar in the community, an advocate for female refugees, and a woman happily married for decades, no one had a bad word to say about Diana…except Lucy.

That was five years ago.

Now, Diana is dead, a suicide note found near her body claiming that she longer wanted to live because of the cancer wreaking havoc inside her body.

But the autopsy finds no cancer.

It does find traces of poison, and evidence of suffocation.

Who could possibly want Diana dead? Why was her will changed at the eleventh hour to disinherit both of her children, and their spouses? And what does it mean that Lucy isn’t exactly sad she’s gone?

Having loved another book by Sally Hepworth I knew that I just needed to read The Mother-in-Law and that I was going to love it. I’ll admit I’ve had this thriller for awhile and while you would think I would have been rushing to pick it up I actually saved this one for a pick me up when I got in a mediocre rut and thankfully it worked.

The story in The Mother-in-Law starts in the present time with Lucy as she and her husband are at home enjoying the day when police show up with some horrible news. Diana, Lucy’s mother-in-law, has been found in her home in what at first  glance seems to be a suicide.

As readers are getting to know Lucy, her husband and the rest of the family as they deal with the news Sally Hepworth begins to sneak in chapters from Diana’s point of view which of course are taking place in the years since Lucy married into the  family. The story flows really well from the  past and present as we discover Diana’s death was not what it seemed to be and someone wanted her dead.

As one might guess I absolutely loved this story and had a great time trying to figure out what happened. One of those books that just immediately drags you into the story and doesn’t let go as the battle between they all seem innocent to everyone is a sketchy lowlife and she’s lucky she lived this long wages war in your head. Would definitely recommend checking this one out but be prepared it’s one you won’t want to put down.

Sally Hepworth is the bestselling author of The Secrets of Midwives (2015), The Things We Keep (2016) The Mother’s Promise (2017), The Family Next Door (2018) and The Mother In Law (April 2019). Sally’s books have been labelled “enchanting” by The Herald Sun, “smart and engaging” by Publisher’s Weekly, and New York Times bestselling authors Liane Moriarty and Emily Giffin have praised Sally’s novels as “women’s fiction at its finest” and “totally absorbing”.

Sally’s novels are available worldwide in English and have been translated into 10+ languages.
​
Sally lives in Melbourne, Australia with her husband and three children.