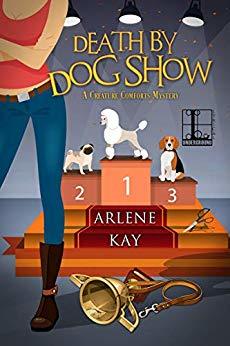 Army vet Persephone “Perri” Morgan has big plans, as her custom leather leashes, saddles, and other pet accessories are the rage of dog and horse enthusiasts everywhere. But when murder prances into the ring at a Massachusetts dog show, Perri must confront a cunning killer who’s a breed apart.

Accompanied by her bestie Babette and four oversize canines, Perri motors down to the Big E Dog Show in high style. Perri hopes to combine business with pleasure by also spending time with sexy DC journalist Wing Pruett. Until a storm traps everyone at the exposition hall . . . and a man’s body is found in a snow-covered field, a pair of pink poodle grooming shears plunged through his heart.

Turns out the deceased was a double-dealing huckster who had plenty of enemies chomping at the bit. But as breeders and their prize pets preen and strut, the murderer strikes again. Aided by her trusty canine companions, Keats and Poe, Perri must collar a killer before she’s the next “Dead in Show” winner.

Death by Dog Show by Arlene Kay is the  first book in the A Creature Comforts Mystery  series. Unfortunately for me this is also one of those books I walked away from scratching my head and wondering what did I just read? By all appearances I thought this one would be a cozy mystery but when finished I’m hesitant to label it as such. The content in here was a bit too centered around the sexual nature for a cozy really, you are not normally constantly hearing about who is with who and who wants to with who in that genre.

So forgetting about labeling this one I still had several issues with just the story itself, the characters and the writing. It is extremely rare for me to not like a cozy to some degree but this just wasn’t for me on many levels starting with the writing. I found for me it felt a bit  too wordy as in overly done and needing to discard the thesaurus making reading feel slow paced and choppy. There were also several times I questioned whether this was even the opener of a series or if I had jumped in on something already in progress when it seemed to hint to things happening in the past as if a reader should already be aware.

As for the  characters in the story, let’s just start with I didn’t particularly care about or like any of them. The main character, Perri, comes off as rather brash and abrasive for the most part, highly judgey when it comes to others, as in forming opinions based off appearance and stereotypes and just generally annoying to me. And  the stereotyping seemed to carry over with everyone else’s personalities. I suppose too that even the crazy character names in this one seemed to bug me feeling a bit cartoon-ish and I can’t recall a single normal name as if alongside the thesaurus we had a outrageous baby name book. Persephone Morgan, Wing Pruett, Roar Jansen. Rafa Ramos… and on and on.

Then when it  came to the setting I was left wanting so much more there too. The show events were confusing, the trainers and handlers are described like a swingers club since they travel so much and get lonely which I’m not buying as realistic at all. And then I thought to myself that I had hoped for humor and personality for the critters like you find quite often in cozies so it felt as if a missed opportunity there too. So in the end  I just wasn’t sold on this one and wouldn’t return to the series. 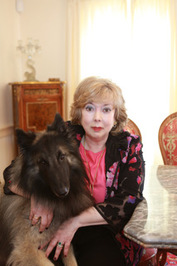 Arlene Kay spent 20 years as a Senior Federal Executive where she was known as a most unconventional public servant. Her time with the Federal Government from Texas to Washington DC, allowed her to observe both human and corporate foibles and rejoice in unintentional humor. These locations and the many people she encountered are celebrated in her mystery novels.

Ms. Kay is the author of INTRUSION and DIE LAUGHING (Mainly Murder Press), as well as SWANN DIVE, MANTRAP and GILT TRIP (BelleBridge Books) published in 2014.

She holds graduate degrees in Political Science and Constitutional Law.