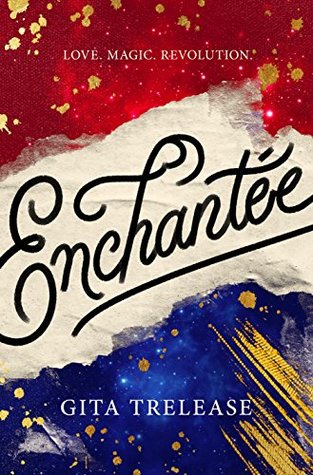 Love. Magic. Revolution…Gita Trelease’s debut fantasy about an orphaned girl who uses dark magic to save her sister and herself from ruin is a “must-have” (School Library Journal, starred review)!

Paris is a labyrinth of twisted streets filled with beggars and thieves, revolutionaries and magicians. Camille Durbonne is one of them. She wishes she weren’t…

When smallpox kills her parents, Camille must find a way to provide for her younger sister while managing her volatile brother. Relying on magic, Camille painstakingly transforms scraps of metal into money to buy food and medicine they need. But when the coins won’t hold their shape and her brother disappears with the family’s savings, Camille pursues a richer, more dangerous mark: the glittering court of Louis XVI and Marie Antoinette.

Using dark magic forbidden by her mother, Camille transforms herself into a baroness and is swept up into life at the Palace of Versailles, where aristocrats both fear and hunger for magic. As she struggles to reconcile her resentment of the rich with the allure of glamour and excess, Camille meets a handsome young inventor, and begins to believe that love and liberty may both be possible.

But magic has its costs, and soon Camille loses control of her secrets. And when revolution erupts, Camille must choose—love or loyalty, democracy or aristocracy, reality of magic—before Paris burns.

Enchantée by Gita Trelease is a young adult historical fantasy that takes place at the time of the French Revolution. While the book has events and figures from this time in history it is a fantasy read with the use of magic being involved with the characters.

Camille Durbonne’s family had never been rich but when her parents both pass away from smallpox Camille and her siblings are left to fend on their own. Camille’s older brother however only gambles away any little bit he gets a hold of and is often abusive to Camille and her younger sister.

In order to protect herself and her sister, Sophie, Camille begins to dabble in the dark magic that had always been forbidden. Instead of only turning bits of metal into coins to survive Camille begins to transform herself to pass as a baroness to enter the high stakes gambling in the Palace of Versailles.

First for the positive side of this one I would readily admit the author did a good job incorporating magic into the historical time frame and bringing it all to life. However, with this one being close to 500 pages yet again I felt as if it just wasn’t going anywhere. I’m not a huge fan of such a slow burning story and want way more action happening than I found in this one. While this one was just so-so to me though I’m sure those that prefer a slow build would love it.

Born in Sweden to Indian and Swedish parents, Gita Trelease has lived in lots of places, including New York, Paris, and a tiny town in central Italy. She attended Yale College and New York University, where she earned a Ph.D. in British literature. Before becoming a novelist, she taught classes on writing, monsters, and fairy tales—some of which have seeped into her stories. Along with her husband and son, Gita divides her time between an old village in Massachusetts and the coast of Maine, where she’s still searching for a secret portal that will take her back to Versailles.

4 comments on “Enchantée by Gita Trelease #bookreview #fantasy #historical #YA”