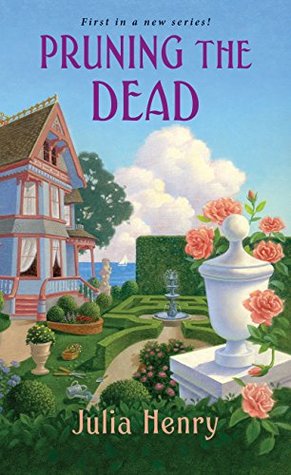 Post-retirement aches and pains can’t prevent sixty-five-year-old Lilly Jayne from keeping the most manicured garden in Goosebush, Massachusetts. But as a murder mystery blooms in the sleepy New England town, can a green thumb weed out a killer?

With hundreds flocking to her inaugural garden party, meticulous Lilly Jayne hasn’t left a single petal out of place. But the picture-perfect gathering turns unruly upon the arrival of Merilee Frank, Lily’s ex-husband’s catty third wife. Merilee lives for trouble, so no one is surprised after she drinks too much, shoves a guest into the koi pond, and gets escorted off the property. The real surprise comes days later—when Merilee is found dead in a pile of mulch . . .

Lilly wishes she could stick to pruning roses and forget about Merilee’s murder—until her best friend and ex become suspects in an overgrown homicide case. Now, aided by the Garden Squad, an unlikely group of amateur crime solvers with a knack for planting, Lilly knows she has limited time to identify the true culprit and restore order to Goosebush. Because if the murderer’s plot isn’t nipped in the bud, another victim could be pushing up daisies!

Pruning the Dead by Julia Henry is the first book of the cozy A Garden Squad Mystery series. As with most cozy series the story within will be a self contained one with the mystery being wrapped up in the one book and a new mystery in each additional book of the series.

This series features an older leading lady in Lilly Jayne who is sixty five years young. Lilly Jayne hadn’t realized she’d become bit withdrawn after her second husband had passed away two years before but when her friends give her a gentle nudge she decides to once again focus on her garden.

Lilly Jayne has acres and acres of garden space at but she hadn’t hosted her tours in years so she wanted to make sure every petal was in it’s place before the hundreds of guests arrived. Attending Lilly Jayne’s affair was her first husband and his third wife who Lilly Jayne doesn’t quite care for but she never wished the woman would turn up murdered and her ex would become a suspect.

Pruning the Dead wasn’t a bad little mystery read at all, in fact most other reviewers seem to absolutely love it. However, when you see a 3, or I say eh, it was OK in the cozy mystery genre generally that means it just wasn’t quirky enough for me. I really enjoy the overly funny stories the most and I noticed someone called this one “realistic”, well yes, but realistic also translated into ordinary to me. It didn’t really help matters that the author tended to be one to tell and not show, especially right off, so I just didn’t get that excited with this new series.

Julia Henry works in the arts, teaches, and is a member of the Mystery Writers of America and Sisters in Crime. She currently writes as Julianne Holmes and J.A. Hennrikus. A blogger for the Wicked Cozy Authors and Killer Characters, she enjoys writing cozy mysteries. For more information, visit jhauthors.com.