Title: Here and Now and Then

To save his daughter, he’ll go anywhere—and any-when…

Kin Stewart is an everyday family man: working in IT, trying to keep the spark in his marriage, struggling to connect with his teenage daughter, Miranda. But his current life is a far cry from his previous career…as a time-traveling secret agent from 2142.

Stranded in suburban San Francisco since the 1990s after a botched mission, Kin has kept his past hidden from everyone around him, despite the increasing blackouts and memory loss affecting his time-traveler’s brain. Until one afternoon, his “rescue” team arrives—eighteen years too late.

Their mission: return Kin to 2142, where he’s only been gone weeks, not years, and where another family is waiting for him. A family he can’t remember.

Torn between two lives, Kin is desperate for a way to stay connected to both. But when his best efforts threaten to destroy the agency and even history itself, his daughter’s very existence is at risk. It’ll take one final trip across time to save Miranda—even if it means breaking all the rules of time travel in the process.

A uniquely emotional genre-bending debut, Here and Now and Then captures the perfect balance of heart, playfulness, and imagination, offering an intimate glimpse into the crevices of a father’s heart and its capacity to stretch across both space and time to protect the people that mean the most.

Here and Now and Then by Mike Chen is a science fiction fantasy novel. This particular time travel adventure takes a look at what happens if things in the past are changed by the time travelers.

Kin is from the year 2142 when time travel becomes common and is an agent for the Temporal Correction Bureau (TCB). The agents of the TCB are tasked with going back and protecting the past from corruption as any little change can change their future that is yet to come.

However, Kin gets sent on an assignment back to the 1990s to take out someone interfering and while he does succeed in his mission he also ends up with his locator damaged. Kin hops that despite the damage someone will come for him in two days when scheduled but instead finds himself trapped for the next eighteen years where he slowly loses the memories of his true time.

Although the idea behind Here and Now and Then is not a new one in the fact that change in the past can change the future I still enjoyed this author’s take on it. This is one that most of the plot is pretty much given away in the blurb so if you didn’t read that yet you may not want to if it sounds like a good one.

For me while I enjoyed the ideas on time travel and the story I did think this one read a little on the dry side and I just didn’t feel it oozing with the emotion it should have which is what led to my rating 3.5 stars. Maybe I was focusing a bit too much on the tech side or perhaps it was the male POV or writer that was a bit off to me but regardless it was still a solid and entertaining story. 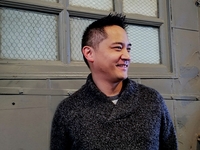