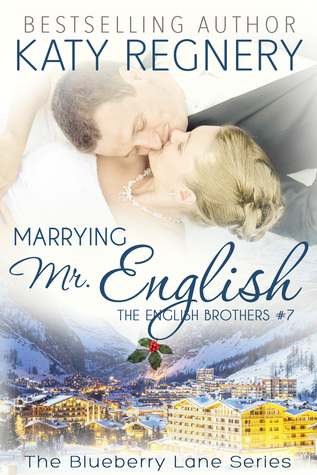 Trust fund playboy, Tom English, was supposed to find a “good woman” and marry her by midnight on his 32nd birthday. If he didn’t, his grandfather promised to disinherit him. Unfortunately for Tom, three days before he was set to get married in Vail, his fiance elopes with her skiing instructor leaving Tom high and dry. With only a week before his birthday, it looks like Tom will forfeit his millions.

When Eleanora Watters, a smart, sassy – totally broke – waitress, spies down-on-his-luck Tom English in the breakfast-all-day diner where she works, she doesn’t think much of him. He’s at least ten years older than she is and he looks like another trust fund jerk with a silver spoon shoved up his…a-hem. But Tom surprises her. Set up on a blind date by Eleanora’s cousin, the two bond over books, and after spending just a few hours together, Eleanora offers to marry Tom in order to help him secure his fortune.

After a whirlwind marriage in Las Vegas, Tom and Eleanora begin to realize that they’re not as unlikely a match as they once seemed, and their feelings for each other deepen. But when Tom’s grandfather sees through their scheme and threatens to cut them off, Tom will have to decide if he wants the money more than the Colorado waitress who seems to be something between “a dream and a miracle.”

This full-length, standalone prequel can be read before OR after the six English Brothers novels!

Marrying Mr. English by Katy Regnery is an opening prequel novella to the The English Brothers romance series. Each book of the series is a different couple so they all can be read as a standalone if choosing to do so.

This prequel actually goes back into the past to tell the story of Tom English and Eleanora Watters who end up the parents of the English children that carry on the rest of the series. Tom had needed a wife desperately when Eleanora walked into his life, if not married in two days he’d lose his multi million dollar inheritance.

Eleanora was a broke waitress at the time she met Tom and heard his story of a runaway bride to be. Tom had the whole thing planned on a good friend walking down the alter only to divorce after inheriting millions so Eleanora offered to step in, for a price of course. What the two didn’t expect was to actually fall in love.

Marrying Mr. English was a cute story but one that I’ve seen done many times before so not overly original. I did like how this was set up to blend into the rest of the series by making it as if telling the future kids about how they became a couple though. And while a bit predictable in nature it was still a nice little quick read to pass the time.