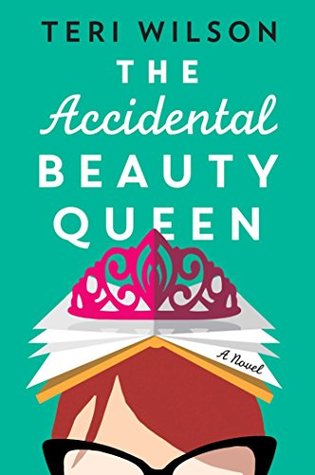 In this charming romantic comedy perfect for fans of Meg Cabot and Sophie Kinsella, critically acclaimed author Teri Wilson shows us that sometimes being pushed out of your comfort zone leads you to the ultimate prize.

Charlotte Gorman loves her job as an elementary school librarian, and is content to experience life through the pages of her books. Which couldn’t be more opposite from her identical twin sister. Ginny, an Instagram-famous beauty pageant contestant, has been chasing a crown since she was old enough to enunciate the words world peace, and she’s not giving up until she gets the title of Miss American Treasure. And Ginny’s refusing to do it alone this time.

She drags Charlotte to the pageant as a good luck charm, but the winning plan quickly goes awry when Ginny has a terrible, face-altering allergic reaction the night before the pageant, and Charlotte suddenly finds herself in a switcheroo the twins haven’t successfully pulled off in decades.

Woefully unprepared for the glittery world of hair extensions, false eyelashes, and push-up bras, Charlotte is mortified at every unstable step in her sky-high stilettos. But as she discovers there’s more to her fellow contestants than just wanting a sparkly crown, Charlotte realizes she has a whole new motivation for winning.

The Accidental Beauty Queen by Teri Wilson is a fun, light-hearted breathe of fresh air romantic comedy. This one actually had a bit more to it with a theme of discovering one’s self and connecting with family plot along with the romance when a set of identical twins swap places.

Charlotte and Ginny Gorman are identical twins but completely opposite in every way they can be. The sisters had lost their mother at an early age and Charlotte had gotten close with their father gaining a love for learning and books while Ginny began to idolize their beauty pageant winning mother.

Now at twenty nine Ginny is signed up to compete in the Miss American Treasure her mother had won years before one last time before she is too old to join. Charlotte has decided to use her vacation time to join Ginny in Orlando and root her on, oh and visit Harry Potter world too of course.

Unfortunately for Ginny when the girls share a meal Ginny becomes allergic to something in the food and swells up tremendously to where she can’t compete. Seeing her sister’s dream in danger Charlotte agrees to step in for a few days but never expected to find herself falling for a judge.

From the moment Charlotte arrived in the opening pages until the very end this one was just a ton of fun. It was so nice to have the whole competition environment but with all the contestants supporting one another instead of fighting or bickering. And I will say Buttercup/Fang stole the show quite often in the story too, adorable. The romance is mostly light flirting while the rest of the plot takes the forefront but definitely enjoyable to follow too.

Teri Wilson is the author/creator of the Hallmark Channel Original Movies Unleashing Mr. Darcy, Marrying Mr. Darcy, and The Art of Us, as well as a fourth Hallmark movie currently in development. Teri is a double finalist in the prestigious 2018 RWA RITA awards for her novels The Princess Problem and Royally Wed. Teri also writes an offbeat fashion column for the royal blog What Would Kate Do and is a frequent guest contributor for its sister site, Meghan’s Mirror. She’s been a contributor for both HelloGiggles and Teen Vogue, covering books, pop culture, beauty, and everything royal. In 2017, she served as a national judge for the Miss United States pageant in Orlando, Florida, and has since judged in the Miss America system. She has a major weakness for cute animals, pretty dresses, Audrey Hepburn films, and good books. Visit her at TeriWilson.net or on Twitter @TeriWilsonAuthr.