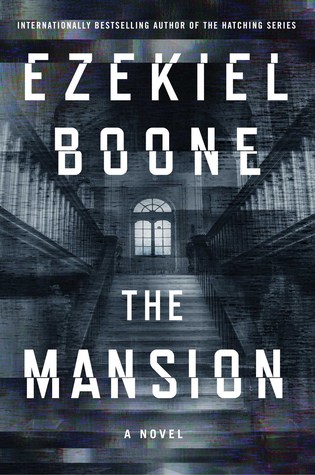 In this white-knuckle thriller from the internationally bestselling author of the “apocalyptic extravaganza” (Publishers Weekly) The Hatching series, a family moves into a home equipped with the world’s most intelligent, cutting-edge, and intuitive computer ever—but a buried secret leads to terrifying and catastrophic consequences.

After two years of living on cheap beer and little else in a bitterly cold tiny cabin outside an abandoned, crumbling mansion, young programmers Shawn Eagle and Billy Stafford have created something that could make them rich: a revolutionary computer they name Eagle Logic.

But the hard work and escalating tension have not been kind to their once solid friendship—Shawn’s girlfriend Emily has left him for Billy, and a third partner has disappeared under mysterious circumstances. While Billy walks away with Emily, Shawn takes Eagle Logic, which he uses to build a multi-billion-dollar company that eventually outshines Apple, Google, and Microsoft combined.

Years later, Billy is a failure, beset by poverty and addiction, and Shawn is the most famous man in the world. Unable to let the past be forgotten, Shawn decides to resurrect his and Billy’s biggest failure: a next-generation computer program named Nellie that can control a house’s every function. He decides to set it up in the abandoned mansion they worked near all those years ago. But something about Nellie isn’t right—and the reconstruction of the mansion is plagued by accidental deaths. Shawn is forced to bring Billy back, despite their longstanding mutual hatred, to discover and destroy the evil that lurks in the source code.

The Mansion by Ezekiel Boone is a horror story that brings the idea of a haunting into this century and the digital age. After reading one might think twice before ever asking Siri or Alexa for any more favors in their lives.

Straight out of school Shawn Eagle and Billy Stafford spent a year locked away in a remote cabin writing the coding that would one day change the world, Eagle Logic. However, instead of both of them basking in the glory when the business booms Shawn got the company and Billy walked away with Emily who had dated Shawn first.

Now, years later, Shawn is a billionaire and Billy is a recovering alcoholic deep in debt so when Shawn approaches Billy to help him with his new AI software Billy can’t help but be interested. The deal is for Billy and Emily to move into the Mansion and fix Nellie but clearing their debt may cost them more than they bargained for.

The Mansion was my first try for a horror novel from Ezekiel Boone and I have to say I was a little torn walking away from this one. The idea of the plot was solid and I did find the writing enjoyable however there just didn’t seem to be enough of the horror. An extremely long time is spent building the back story and characters making things progress slowly so it felt as if the actual “haunting” was buried and rushed to a conclusion so in the end I would rate this at 3.5 stars.

Ezekiel Boone lives in upstate New York with his wife and children. He is the internationally bestselling author of The Hatching, Skitter, and Zero Day.