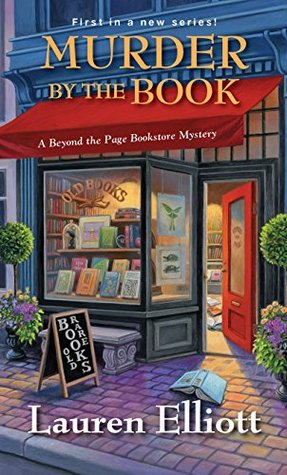 Title: Murder by the Book

Addie Greyborne loved working with rare books at the Boston Public Library—she even got to play detective, tracking down clues about mysterious old volumes. But she didn’t expect her sleuthing skills to come in so handy in a little seaside town . . .

Addie left some painful memories behind in the big city, including the unsolved murder of her fiancé and her father’s fatal car accident. After an unexpected inheritance from a great aunt, she’s moved to a small New England town founded by her ancestors back in colonial times—and living in spacious Greyborne Manor, on a hilltop overlooking the harbor. Best of all, her aunt also left her countless first editions and other treasures—providing an inventory to start her own store.

But there’s trouble from day one, and not just from the grumpy woman who runs the bakery next door. A car nearly runs Addie down. Someone steals a copy of Alice in Wonderland. Then, Addie’s friend Serena, who owns a nearby tea shop, is arrested—for killing another local merchant. The police seem pretty sure they’ve got the story in hand, but Addie’s not going to let them close the book on this case without a fight . . .

Murder by the Book by Lauren Elliott is the first book in the cozy Beyond the Page Bookstore Mystery series. Well, I’m going to call this one a cozy mystery as it does have the elements there but it also felt a bit like romantic suspense too.

Addison Greyborne had not been having a good year before she moved to a small New England town that had been named for her ancestors back in Colonial times. Addie is still recovering from the murder of her finace, her father dying in a tragic accident and then finding out a long lost aunt had also died but left her whole estate to Addie.

Addie inheritance however has given her the opportunity to start over and continue to work with books after leaving her job at the Boston Public Library. With her aunt having so many rare book in her collection and the funds to open a shop Addie decides to open Beyond the Page and had even begun to make friends in the town when her good friend Serena is arrested for murder and Addie finds herself teaming up with Serena’s police chief brother to clear her name.

Now as I said this one seemed to be crossing a bit over into romantic suspense with the main character not exactly working on her own and against the police as with a normal cozy set up. Instead Addie is pushing herself into the investigation and actually working with the police chief using her skills she had from her previous job and with a lot of flirting between the two a romantic connection did begin to grow. I do however like this set up as it gives credibility to the investigation.

This one however was missing my love of the overly quirky and eccentric characters but Addie was likable enough along with her love interest that I still enjoyed getting to know them. I did think a few times though that Addie’s actions seemed a bit too childish for a thirty something woman while flirting with someone. In the end though the book had a ton of action and an interesting plot relevant to the character that led me to give this one 3.5 stars and I would definitely continue with the series.

Lauren Elliott grew up devouring Nancy Drew before graduating to Agatha Christie. Eventually, she tried her hand at penning a novel herself. Murder by the Book is her first mystery.