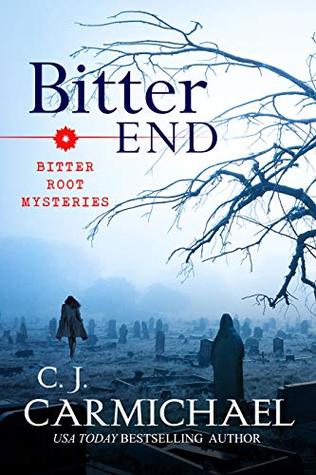 Murder in a small town is always personal.

When a young mother is murdered in the isolated ranching town of Lost Trail, Montana, the father of her child is the first suspect. In this case, there are two: the biological father who hasn’t seen his daughter in over a year and the adoptive father whose life hangs in the balance as he struggles with cancer.

Zak Waller is Lost Trail’s newest deputy. He’s also locked in a power struggle with the town’s old-school Sheriff. If Zak solves this case maybe he’ll finally get the respect he deserves. But is he willing to tear a family apart in the process?

Perfect for fans of the British television film Broadchurch.

Bitter End by C. J. Carmichael is the third book of the Bitter Root Mysteries series. Each book in the series is centered around a new mystery so they could be understood if reading as a standalone however there is character development carried over from book to book.

Each book changes the point of view during the read but with the big focus on Zak Waller who has been working as a dispatcher for the Sheriff’s Office of Lost Trail, Montana. After solving two huge cases in the previous two books Zak has now earned a badge along with his dispatcher duties.

Bitter End brings the return of Willow McTavish to Lost Trail when she finds that Justin has been diagnosed with cancer. Willow had married Justin to give her young daughter a father but shortly after the adoption papers were signed Willow had run off again with the girls father. Now she thinks she’s going to sweep in and take her daughter back but before that happens her body is found and Zak now needs to find her murderer with both men in Willow’s life being strong suspects.

Again I found myself amazed at what C.J. Carmichael can accomplish with a story in such a short time. These books aren’t incredibly long but so much gets packed into each story and never once do I feel like the details are forgotten or the mystery is too rushed. Everything in the book is woven together wonderfully to keep a reader guessing through each turn of the page and the characters have more depth to them than some 500+ page reads. Such a great mystery series with a wonderful small town setting.

Married, with two grown daughters, C.J. divides her time between her home in Calgary, Alberta and the family cottage on Flathead Lake, Montana. To be the first to know about upcoming releases and promotions please sign up for her monthly newsletter.