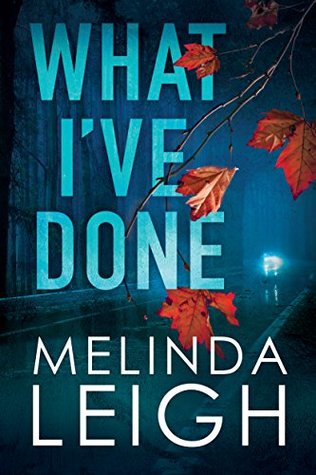 Morgan Dane’s new client has blood on her hands—and no recollection of what happened—as the #1 Amazon Charts bestselling series continues.

Haley Powell wakes up covered in blood, with no memory of the night before. When she sees a man lying in the backyard, stabbed to death, she has only one terrified thought: What have I done?

Agreeing to take the case as a favor to her PI friend Lincoln Sharp, Morgan must scale a mountain of damning circumstantial and forensic evidence to prove her client innocent. Haley couldn’t appear more guilty: her bloodstained fingerprints are on the murder weapon, and she has no alibi. But Morgan can’t shake the feeling that this shocked young woman has been framed.

Someone out there is hell-bent on sabotaging her defense, targeting Morgan, her partner, and especially Haley. Someone who will stop at nothing—and whose next move will be deadly.

What I’ve Done by Melinda Leigh is the fourth installment of the thrilling romantic suspense Morgan Dane series. Each book in the series features a new case to solve so they could be read as standalone novels if choosing to do so. However, there is character development that carries over book to book so it’s always best to read the series as a whole. This series is also a spin off of another of the author’s but I have not read the first and never noticed anything missing from these novels or felt as if I had missed anything.

Morgan Dane is the lead character in the series, a mother of three that had returned to her home town after the loss of her husband. Morgan was a former prosecutor but she is now on the other side of the courtroom taking on cases as a defense attorney. With every new case Morgan works with her former high school boyfriend turned P.I., Lance Kruger.

Morgan’s new case comes to her via Lance’s P.I. partner, Lincoln Sharp. Years ago Sharp’s partner was killed in the line of duty and now his widow seeks him out to help her daughter who had been accused of murder. Haley had awakened in a strange house with no memory of the night before covered in blood. She finds the man she had been flirting with at the bar stabbed multiple time and thinks what did I do??

Having followed this series from the beginning I’ve become a huge fan of these characters and the cases they take on. Morgan is a tough as nails lead who is backed by her P.I. partners who are also very likable. The romance has been a slow build in the background of some intense cases with plenty of action in the  investigations. There’s just the right amount of questioning suspects, following clues and forensics to give it a realistic feel with some great twists and turns along the way. Definitely recommend checking out the entire series.

Wall Street Journal bestselling author Melinda Leigh is a fully recovered banker. A lifelong lover of books, she started writing as a way to preserve her sanity when her youngest child entered first grade. During the next few years, she joined Romance Writers of America, learned a few things about writing a novel, and decided the process was way more fun than analyzing financial statements. Melinda’s debut, She Can Run, was nominated for Best First Novel by the International Thriller Writers. She has also garnered Golden Leaf and Silver Falchion awards, along with nominations for two RITAs and three Daphne du Maurier awards. Her other novels include She Can Tell, She Can Scream, She Can Hide, She Can Kill, Midnight Exposure, Midnight Sacrifice, Midnight Betrayal, Midnight Obsession, Hour of Need, Minutes to Kill, Seconds to Live, Say You’re Sorry, and Her Last Goodbye. She holds a second-degree black belt in Kenpo karate; teaches women’s self-defense; and lives in a messy house with her husband, two teenagers, a couple of dogs, and two rescue cats.