In Her Bones by Kate Moretti #bookreview #thriller 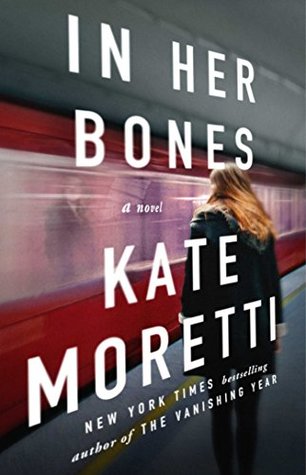 Title: In Her Bones

Fifteen years ago, Lilith Wade was arrested for the brutal murder of six women. After a death row conviction, media frenzy, and the release of an unauthorized biography, her thirty-year-old daughter Edie Beckett is just trying to survive out of the spotlight. She’s a recovering alcoholic with a dead-end city job and an unhealthy codependent relationship with her brother.

Edie also has a disturbing secret: a growing obsession with the families of Lilith’s victims. She’s desperate to see how they’ve managed—or failed—to move on. While her escalating fixation is a problem, she’s careful to keep her distance. That is, until she crosses a line and a man is found murdered.

Edie quickly becomes the prime suspect—and while she can’t remember everything that happened the night of the murder, she’d surely remember killing someone. With the detective who arrested her mother hot on her trail, Edie goes into hiding. She’s must get to the truth of what happened that night before the police—or the real killer—find her.

Unless, of course, she has more in common with her mother than she’s willing to admit…

Perfect for fans of Ruth Ware, In Her Bones features Moretti’s “riveting and insightful” (Megan Miranda, New York Times bestselling author) prose and “chillingly satisfying” (Publishers Weekly) twists, and will leave you questioning the nature of guilt, obsession, and the toxicity of familial ties.

In Her Bones by Kate Moretti is a thriller that tackles the question of just what might happen with the families that a killer has left behind. Family and friends often are quoted with saying they had no idea as the suspect can live a perfectly normal life around their crimes.

Fifteen years ago Lilith Wade was arrested and tried for the brutal murders of six women and sent to a maximum security prison. The families of the victims were not the only ones left behind after Lilith’s conviction, Lilith was a mother herself and her children have done their best to hide from the media attention.

Now at thirty Edie Beckett has developed an obsession with finding out more about the families of her mother’s victims. Edie can’t help but wonder how or if they’ve moved one with their lives being in a dead end job and a recovering addict herself. Edie gets a little to close to one family member though and then finds herself the suspect in his murder investigation.

Well, as one may guess when they see that I’ve rated this one at 2.5 stars I wasn’t a huge fan of this one from Kate Moretti. The problem didn’t lie in the writing style as this wasn’t my first book by the author but more in the overall story. I wasn’t a huge fan of Edie from early on and questioned her motives and moves and along with that I also guessed the conclusion way too early in the story so needless to say this one just wasn’t for me.

Kate Moretti is the New York Times bestselling author of Thought I Knew You, Binds That Tie, and While You Were Gone. She lives in eastern Pennsylvania with her husband and two kids. Find out more at KateMoretti.com or follow her on Twitter: @KateMoretti1 or Facebook: /KateMorettiWriter.

2 Comments on “In Her Bones by Kate Moretti #bookreview #thriller”