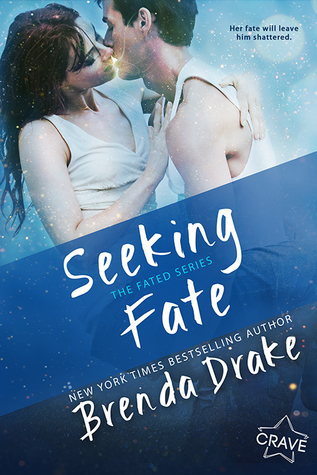 Fate changer Daisy Layne is nervous about searching Europe for a firstborn son doomed to die on his eighteenth birthday. But she’s the only one who can save him. No pressure or anything. She needs the help of guide Andrei Vasile, who she’s been talking to online for two years. Still, meeting him in person…that’s a whole different story.

Andrei is determined to keep Daisy safe, even if touching her could kill him. At least, that’s what his family has told him about fate changers like Daisy. She’s strong and beautiful, and it’s his job to keep her alive. Unfortunately, what she doesn’t know could kill her.

Save a life. End a curse. And never, ever get too close…

Seeking Fate  by Brenda Drake is the third book of the young adult romantic fantasy The Fated series. Each book in the series has switched the main characters to form a new romantic relationship however the fantasy side of the story does carry over from book to book leaving the series best enjoyed from the beginning.

The entire series is written around the three Layne sisters who have magical abilities when it comes to others fate and destiny. In Seeking Fate Daisy Layne has traveled to Europe to track down a first born son doomed by a family curse to die on his 18th birthday to try to stop it from happening.

When getting to Europe Daisy meets up with Andrei Vasile with whom she has been in contact with online for the past two years while he helped her research and trace family lines to find the one Daisy needs to help. When meeting in person however Daisy finds it hard to be as comfortable around Andrei as she had been online.

Having read the entire series from the beginning I knew that I would enjoy Seeking Fate. The series does a wonderful job taking a teen romance and intertwining it into a action packed fantasy series that keeps the pages turning. Love the idea of the girls taking tarot and fortunes to a whole new level with the abilities they have been giving in the story. Fun series that I’d recommend checking out!

Brenda Drake, the youngest of three children, grew up an Air Force brat and the continual new kid at school. Her fondest memories growing up is of her eccentric, Irish grandmother’s animated tales, which gave her a strong love for storytelling. So it was only fitting that she would choose to write stories with a bend toward the fantastical. When Brenda’s not writing or doing the social media thing, she’s haunting libraries, bookstores, and coffee shops or reading someplace quiet and not at all exotic (much to her disappointment).