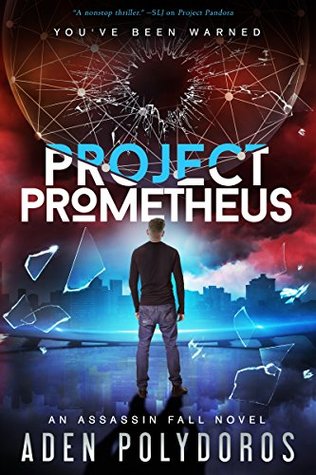 The Academy stole everything from Hades, their perfect assassin. Angry and leaving bodies in his wake, he finds two other ex-assassins doing the exact same thing.

Tyler and Shannon once killed for The Academy. Now they’re tracking and hunting down its scientists. So why is The Academy only after Hades?

Shannon will do whatever it takes to protect Tyler, even if it means teaming up with a former rival. While she seeks answers to her past, Tyler wants to learn the truth about the mysterious white room, which no one has ever seen except him.

As for Hades? He simply wants revenge.

They all need answers, even if it means returning to the organization where it all started.

Project Prometheus by Aden Polydoros is the second full length novel of the young adult action packed Assassin Fall thriller series. There is also a prequel novella to kick off the series and it is best to read the books in order or in the very least the two full length books in order as the second book will not make sense jumping into.

The series opened introducing several teens that had been trained at a place known as the Academy. A secretly ran organization had trained them to become soldiers and assassins following orders when given.

Now however the group is onto what has been done to them and finally begin to fight back against those that have controlled their lives. Told from alternating point of views you follow those left from the first book as they go about their revenge and taking out those involved in the project.

Having read all three books of the series my enjoyment has gone up with each I’ve picked up. The series is definitely fast paced and action packed which I love but reading the first full length book it did take a while to get used to the characters having several names referring to them with regular and code names along with case numbers. Now that I know them I just wanted more and more action and answers so when finished with this installment I would rate it at 4.5 stars.

Aden Polydoros grew up in Long Grove, Illinois, and now lives in Arizona. He is a writer of young adult fiction. When he isn’t writing, he enjoys reading and going on hikes in the mountains. Aden Polydoros is a 2015 Gold Medalist in the Scholastic Art and Writing Awards and has published two short stories in Best Arizona Teen Writing of 2015.