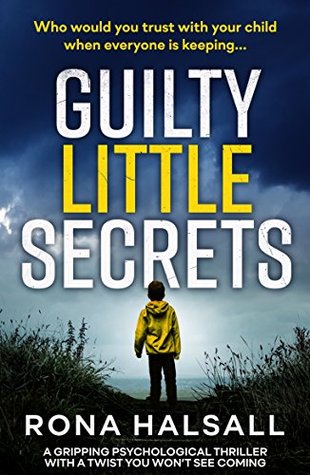 What if trying to protect your child only put them in danger?

Natalie is desperate to find her little boy. It has been more than three years since she saw Harry. Three long years in prison for a crime she knows didn’t commit.

But her husband believed the police, and took their son.

Who has gone to such great lengths to destroy Natalie’s life? Everyone she once trusted – friends, family, everyone close to her – what secrets do they hide?

If Natalie finds the truth, will she get Harry back, or lose him forever?

A totally gripping psychological thriller– perfect for fans of Big Little Lies, The Girl on the Train and C.L Taylor.

Guilty Little Secrets by Rona Halsall is a thriller that is mainly told from the point of view of it’s lead character Natalie. There are chapters in the now and then there are chapters from four years before but there is also an unknown voice in the present that is keeping tabs on Natalie.

Natalie has just been released from prison a bit early and the only thing Natalie wants in the world is to find her son and see him again. You see, Natalie’s son was only a baby when police showed up at her front door and took her away. Natalie had no clue what she would have done to have the police needing to question her but she was having problem with her memory at the time and struggling after having her son.

When the police go her to the station they began to question Natalie about missing money from one of her clients. Natalie worked for her husband in his finance company and right at six months leave being up he expected her to return to work no matter how she was feeling. Well, with money gone missing and all signs pointing to Natalie she is arrested for theft and her husband leaves the country with her son so when released she will do anything to find him.

Looking at my rating one might think I have a ton of issues with this debut novel but I really didn’t. It read rather easily with smooth writing going back and forth from the past and the present. The story was also one that was compelling although I would note it did get a tad slow in the middle but not bad overall. My rating though for me reflects the fact that I solved this one in the opening chapters. I really really hoped I would be wrong and there would be a great twist I didn’t see coming but unfortunately not so it was hard to be overly excited about the story but I would be interested in seeing what the author has up her sleeve in the future.

I love a mystery to solve, and write psychological thrillers for Bookouture – my debut, Guilty Little Secrets is out on 17th August 2018 and my second will be out in November 2018.

I live on the Isle of Man with my husband, three guinea pigs and two dogs who are very helpful when it comes to discussing plots. As are my three children and two step-children, who are all grown up and lead interesting lives of their own, providing plenty of ideas for new stories!