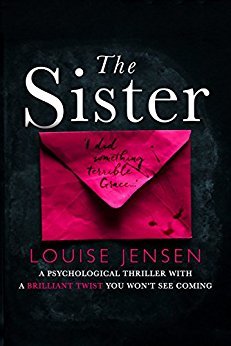 “I did something terrible Grace. I hope you can forgive me…”

Grace hasn’t been the same since the death of her best friend Charlie. She is haunted by Charlie’s last words, and in a bid for answers, opens an old memory box of Charlie’s. It soon becomes clear there was a lot she didn’t know about her best friend.

When Grace starts a campaign to find Charlie’s father, Anna, a girl claiming to be Charlie’s sister steps forward. For Grace, finding Anna is like finding a new family, and soon Anna has made herself very comfortable in Grace and boyfriend Dan’s home.

But something isn’t right. Things disappear, Dan’s acting strangely and Grace is sure that someone is following her. Is it all in Grace’s mind? Or as she gets closer to discovering the truth about both Charlie and Anna, is Grace in terrible danger?

There was nothing she could have done to save Charlie… or was there?

The Sister is another wonderful psychological thriller from Louise Jensen. The Sister was originally published in 2016 and was Ms. Jensen’s first thriller but I did not begin reading her work until her next book. So far she has released four thrillers and I’d read three and enjoyed them so when I saw this one was be re-released I knew I had to pick it up and I’m glad I did.

The Sister follows twenty five year old Grace who is still mourning the loss of her best friend Charlie. Grace and Charlie had buried some mementos when they were kids and with Charlie gone Grace thinks it’s now time to find out what it was that Charlie had put in the box.

As we are following Grace in the present time though the story also flashes back to the past to show Charlie and Grace as they became friends. It follows the pair all the way up to the events that led to their eventual separation and to the day that Grace lost Charlie forever.

When Grace finds that Charlie wanted to eventually find her father and knowing that she never did Grace comes up with the plan to do it now in her honor. So when a girl named Anna claims to be related to Charlie Grace is happy to bring her into her life and the home she shares with her boyfriend.

The Sister thankfully was another that was easy to follow even though it switched between time periods and I never felt lost as it went back and forth the way you may do with some books. With different events going on in both timelines it’s almost as if reading two stories but of course everything eventually weaves together wonderfully. Another great read from an author I’ve come to enjoy.

Louise Jensen is a USA Today bestselling author of psychological thrillers. Her first two novels, The Sister and The Gift, were both international #1 bestsellers, and have been sold for translation to sixteen countries. Her debut novel, The Sister, was nominated for The Goodreads Awards Debut of 2016. Louise lives in Northamptonshire with her husband, children, madcap dog and a rather naughty cat. She loves to hear from readers and writers and can be found at LouiseJensen.co.uk, where she regularly blogs flash fiction.