The Other Woman by Sandie Jones @realsandiejones @MinotaurBooks #bookreview #thriller 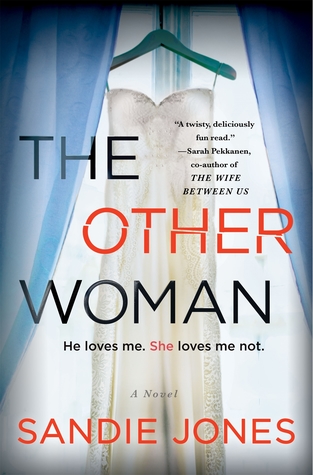 Title: The Other Woman

The most twisty, addictive and gripping debut thriller you’ll read this year.

BUT SHE LOVES YOU NOT: Lurking in the shadows is a rival, a woman who shares a deep bond with the man she loves.

AND SHE’LL STOP AT NOTHING: Emily chose Adam, but she didn’t choose his mother Pammie. There’s nothing a mother wouldn’t do for her son, and now Emily is about to find out just how far Pammie will go to get what she wants: Emily gone forever.

THE OTHER WOMAN will have you questioning her on every page, in Sandie Jones’ chilling psychological thriller about a man, his new girlfriend, and the mother who will not let him go.

The Other Woman by Sandie Jones is another of those books that make me crave popcorn once I pick them up and start reading. It’s the type of story that early on you get the entire general idea of what will happen but still fun to sit back and wait for the fireworks and enjoy the show along the way.

Emily has come out of a relationship where she caught her boyfriend cheating with a good friend of hers so she’s a bit hesitant to get back in the game until she meets Adam. The more Emily gets to know Adam the more she thinks he’s absolutely perfect for her, that is until he brings her home to meet his mother.

On the surface Emily’s first meeting with Pammie goes well but for Emily the doubts begin to creep in after that meeting. While Pammie appears to be friendly and welcoming little things she does or say seem to get the best of Emily but Emily is not willing to give up her love for Adam despite his mother.

The story inside of The Other Woman is not a new one but it’s one that has managed to grab my attention time and time again. The good old ‘evil mother in law to be’ trope did manage to entertain me until the very end again this time and oh what an ending it was. Emily and Pammie made such an entertaining pair this go round that I flew right through the book and would certainly recommend this to those that enjoy a good old fashioned drama filled suspenseful ride.

Sandie Jones has worked as a freelance journalist for over twenty years, and has written for publications including the Sunday Times, Woman’s Weekly and the Daily Mail. She lives in London with her husband and three children. The Other Woman is her debut novel.