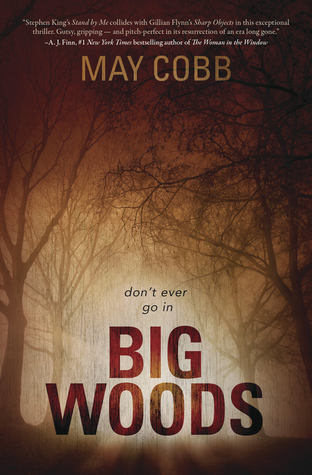 “Stephen King’s Stand by Me collides with Gillian Flynn’s Sharp Objects in this exceptional thriller. Gutsy, gripping—and pitch-perfect in its resurrection of an era long gone.”—A. J. Finn, #1 New York Times bestselling author of The Woman in the Window

It’s 1989 in the sleepy town of Longview, Texas, when ten-year-old Lucy disappears. Her parents, the police, and the community all brace for the worst, assuming her body will soon be found in Big Woods. Just like the other unsolved kidnappings.

But then Lucy’s fourteen-year-old sister, Leah, starts having dreams about Lucy—dreams that reveal startling clues as to what happened. Leah begins her own investigation, and soon she meets a reclusive widow who may hold the key to finding Lucy . . . if only she can find the courage to come forward.

Delving into the paranoia surrounding satanic cults in the 1980s, Big Woods is an emotionally wrought, propulsive thriller about the enormity of grief, the magical bond between sisters, and a small town’s dark secrets.

Ok folks, yes, I’ve found yet another book to take a trip back into the 80s with Big Woods by May Cobb. As soon as I saw that the story took place in that era I knew I had to read it and I’m glad I did as from the opening pages it really felt like I’d time traveled.

The story began with ten year old Lucy heading off to school when a car seems to begin to follow her. Unfortunately the unthinkable happens and Lucy’s family is frantic with worry when she can’t be found. The story then begins to switch the point of view between Lucy’s older sister Leah as the search begins and then another character, Sylvia, who is in her 70s and works as a nurse.

Leah’s point of view shows the frantic search and how her family begins to fracture from the disappearance of her sister.  Leah keeps having dreams though of Lucy and she believes that she is still alive, if only anyone would believe her. Sylvia on the other hand doesn’t know the family but she has cared for a young girl with a wild tale of what happened to her in Big Woods but no one will listen to Sylvia when she tries to warn them either.

May Cobb did a wonderful job with this one giving it that perfect vibe of the era, adding in a slight supernatural twist and keeping the pace steady as the point of view went back and forth between the two sides of the story. This one was definitely one that kept my attention and the pages turning waiting to see what the outcome would be.

May Cobb grew up in the piney woods of East Texas where her debut thriller, BIG WOODS, is set.

After graduating college, she moved to San Francisco where she studied Victorian Literature for her Master’s, and gravitated towards that era’s detective novels, known as “sensation novels”, such as Wilke Collins’ THE WOMAN IN WHITE.

She then lived in Los Angeles for a few years where she worked for filmmaker/writer Ron Shelton and his wife, the actress Lolita Davidovich.

She now lives in Austin with her husband and son where they eat way too much Tex-Mex and BBQ. For the past twenty years, she’s been working on a nonfiction book about the late, great, jazz artist, Rahsaan Roland Kirk, whom she regards to be one of the greatest musicians who ever lived. (Seriously, if you’ve not heard of him, check him out: https://en.wikipedia.org/wiki/Rahsaan_Roland_Kirk).

Her writing has appeared in The Washington Post, The Rumpus, Austin Monthly, and Edible Austin.

Things about her that are probably not all that interesting: She doesn’t trust people who don’t nap, she daydreams about owning a craftsman-style home one day with a big front porch (and spends way too much time on realtor.com), and she can moonwalk almost as good as MJ.

BIG WOODS is inspired by an eerie, true story, and A.J. Finn, #1 New York Times bestselling author of THE WOMAN IN THE WINDOW offered this glowing praise: “Stephen King’s Stand by Me collides with Gillian Flynn’s Sharp Objects in this exceptional thriller. Gutsy, gripping—and pitch-perfect in its resurrection of an era long gone.”