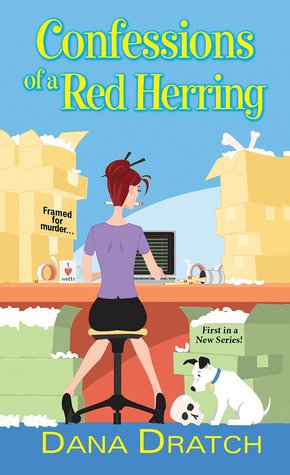 Title: Confessions of a Red Herring

As a reporter, she’s used to covering the news.
Now she’s the headline.

Alex Vlodnachek has been a reporter for 12 years, a P.R. rep for three months, and a murder suspect for all of 24 hours. When her agency’s double-dealing CEO is stabbed, scheming co-workers cast the new redhead as a compelling red herring. The story is media catnip—especially her salacious nickname: Vlod the Impaler.

Even Alex has to admit she looks guilty.

Out of a job and under suspicion, Alex is running low on cash, when she’s visited by a second disaster: her family. Soon her tiny bungalow is bursting with her nearest and not-so-dearest. To keep herself out of jail—and save what’s left of her sanity—Alex returns to her reporting roots. She goes undercover to reclaim her life, break the story, and unmask a murderer. Pretty much in that order.

What she doesn’t know: The killer also has a to-do list.
And Alex is on it.

Confessions of a Red Herring by Dana Dratch is the first book in the new cozy A Red Herring Mystery series. In this series Alex Vlodnachek had spent years as a reporter but left that industry to work in a PR firm but never expected that move would land her straight into a murder investigation.

The CEO at Alex’s new agency turned up dead and all eyes landed on Alex as the one who had done the deed but when that also gets her fired from her job and broke Alex knows she needs to clear her name. The stories begin to fly on just who Alex was aiming the attention at her so she does a little undercover investigating to find the truth but that just may put her and her family in danger.

When picking up a book and it makes me chuckle on the opening page I know that I should be in for a good read. Starting this one off that was just what happened when I read the opening….

“I felt zero guilt for calling in sick Monday. “Sick of Work” would have been more accurate.”

Ok, now really who out there can’t relate to that one?? Pretty sure it would be a pretty low percentage that had not had that thought at least once in their lives so Alex immediately became somewhat relatable already. There were a few times I think the humor fell a little short of the mark to me but plenty of times that it had me laughing too. I do think there were a few slower moments along the way in the story, perhaps when the humor wasn’t drawing me in but overall this one was a fun start to this series that will bring me back for more.