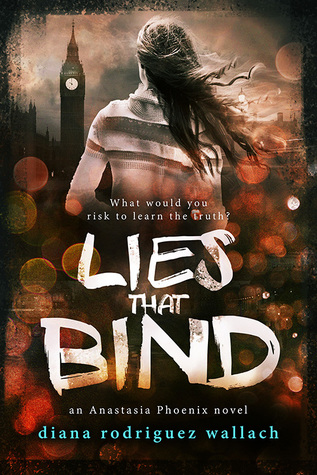 What do you do when you learn your entire childhood was a lie?

Reeling from the truths uncovered while searching for her sister in Italy, Anastasia Phoenix is ready to call it quits with spies. The only way to stop being a pawn in their game is to remove herself from the board. But before she can leave her parents’ crimes behind her, tragedy strikes. No one is safe, not while Department D still exists.

Now, with help from her friends, Anastasia embarks on a dangerous plan to bring down an entire criminal empire. From a fire-filled festival in England to a lavish wedding in Rio de Janeiro, Anastasia is determined to confront the enemies who want to destroy her family. But even Marcus, the handsome bad boy who’s been there for her at every step, is connected to the deadly spy network. And the more she learns about Department D, the more she realizes the true danger might be coming from someone closer than she expects…

Lies That Bind by Diana Rodriguez Wallach is the second book in the young adult Anastasia Phoenix trilogy. The series is a bit like taking James Bond and turning him into a teenage female who is navigating a world of spies, lies and alibis. The books are best read in order as the story picked up right where it had left off in Proof of Lies.

In the first book we met Anastasia Phoenix who had always felt on the outs wherever she’d been since her scientists parents had moved the family all around the world over the years. When they said there was going to be yet another move Anastasia was of course upset and refused to speak to them as they left on yet another trip but little did she know that would be the last time she would see them when a horrible accident happened.

Time passed with Anastasia living with her older sister, Keira, after their parents accident until one night Keira decided to throw a party. The next morning Anastasia believed Keira had male company so she left only to return to find a bathroom full of blood and her sister missing. Already having lost her parents Anastasia was determined to find her sister when it seemed no one else even believed Keira was even still alive.

Now the story picks up after Anastasia has found Keira with the help of Marcus, a boy that she finds herself falling for. The teens all group together to battle Department D that their parents have been involved with when it becomes clear that the danger is still imminent when someone close to Anastasia is found murdered with a message to her that Department D is still coming.

The series is yet again another action packed adventure as Anastasia and company again find themselves traveling the globe with danger around every corner. This installment however to me felt a bit like the middle book that it is with it touching on the previous story and seemingly filled to set up what will surely be a crazy ending. Still a bit over the top as far as believability with a group of teens battling the undercover group it’s one to just sit back and enjoy as the story unfolds. Even with rating a tad lower at 3.5 stars I’ll still definitely be looking to the next in the adventure to see if the evil Department D is finally stopped.

Diana Rodriguez Wallach is the author of three award-winning young adult novels: Amor and Summer Secrets, Amigas and School Scandals, and Adios to All The Drama, as well as Mirror, Mirror, a YA short-story collection based on the Narcissus myth. In 2010 Diana was named one of the Top Ten New Latino Authors to Watch by LatinoStories.com, and she placed second in the International Latino Book Awards. In June, Diana will begin her new position as Creative Writing Teacher for Johns Hopkins University’s Center for Talented Youth.